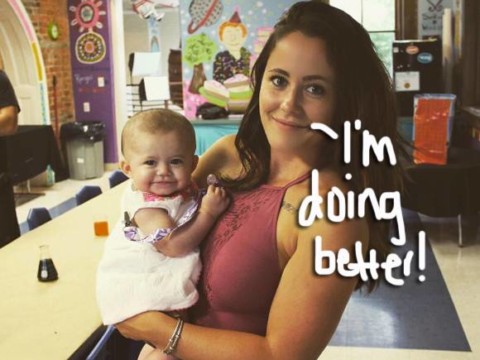 Jenelle Evans is putting her heroin past behind her!

As we previously reported, the Teen Mom 2 star admitted to shooting up the drug “four or five times a day” in an excerpt from her new memoir, Read Between the Lines: From the Diary of a Teenage Mom.

Now, the momma of three is telling E! News all about her addiction and “low point.”

Related: Jenelle SLAMS Troll For Asking If Her Fiancé Has AIDS

Opening up to Ken Baker, she shared how she nearly overdosed!

“I think my low point was with my drug issue and the whole heroin thing. I almost overdosed and died. I was trying to run away from my problems. God knows what might have happened. I might have been dead.”

And Jenelle continued, adding it was her withdrawal which led her to seek help, and eventually check herself into a New Jersey hospital:

“When I started withdrawing for the first time in my life, I was like, ‘This is not the way I want to live. This is scaring the shit out of me, and I need to get help right now.'”

Addiction is no easy battle to overcome!

While it seems like the starlet is in a much healthier place, she’s struggling with an entirely different issue: getting full custody of her son Jace from her mom!

“I think our relationship’s lost. I don’t think it’s ever really coming back at any time. [Barbara] knows if she gives [Jace] to me that I will cut her off. That will be it. And she’s scared.”

You can catch more of Jenelle’s interview on Wednesday night at 7 and 11 p.m.!