Celebrities Latest
Home abuse Morning Joe’s Joe Scarborough Is Officially DONE Being A Republican Thanks To... 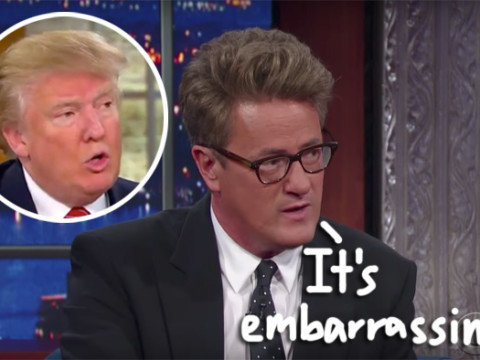 Joe Scarborough is fed up with the GOP kissing Donald Trump‘s pruny ass!

So much, he’s vowed to leave the Republican party and become an Independent!

Appearing alongside Morning Joe cohost and fiancée Mika Brzezinski on The Late Show, the former member of the House of Representatives skewered the party he long served for betraying “their core values” during last year’s election season by supporting Trump.

Related: Trump Kept Asking For The Name Of Mika’s Surgeon!

The GOP sold out even more after Trump’s election, according to Scarborough, completely ignoring the president’s racist travel ban and relationship with KKK leader David Duke.

In fact, Scarborough is so embarrassed by Republicans turning the other way, he straight up renounced his affiliation with the party during Tuesday night’s interview!

When Stephen Colbert asked about Scarborough’s own loyalty to the party, he hesitated and responded:

“Um… I am a Republican, but I’m not gonna to be a Republican anymore. I’ve got to become an Independent.”

Way to go, Joe! Looks like he might be endorsing Independent candidate Dwayne “The Rock” Johnson in 2020!

Watch a clip of the interview (below).

The political pundits didn’t stop there — Mika tweeted about Joe’s political shuffle while Joe continued to call out Republicans for selling out:

How long will Republicans subvert the best interests of their country to cover up for Donald Trump?
— Joe Scarborough (@JoeNBC) July 11, 2017

Damn. The GOP must be bleeding badly from these digs!

Morning Joe’s Joe Scarborough Is Officially DONE Being A Republican Thanks To Donald Trump! Watch!