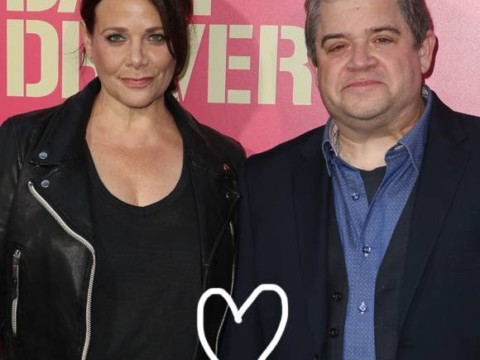 As you’ve likely seen by now, the two got engaged a month after making their red carpet debut at the Baby Driver premiere in El Lay. A little over a year ago in April 2016, Patton’s wife Michelle McNamara passed away in her sleep.

Sadly, The King of Queens actor and the Hollywood Heights actress have their fair share of haters.

On Tuesday, a fat shaming troll did the unthinkable and criticized their relationship by slamming the 48-year-old comedian’s looks. As seen on Twitter:

@pattonoswalt @MeredthSalenger Congrats. But How???

That’s when Meredith clapped back by listing Patton’s MANY positive attributes.

When a different Twitter user tried to play devil’s advocate by asserting “a man wouldn’t fall in love with a 50 lbs overweight 60 year old woman,” Miz Salenger had the perfect response for that as well!

But we all know it doesn’t work the other way. A man wouldn’t fall in love with a 50 lbs overweight 60 year old woman.
— alexisdelarge (@lastangrytweet) July 11, 2017

And guess what? Oswalt thinks his bride-to-be is perfect just the way she is!

These two are absolutely inseparable!