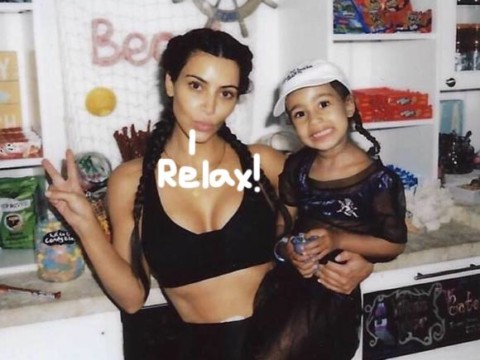 Earlier this week, the KUWTK star’s daughter North West was photographed in New York wearing (what appeared to be) a cream-colored corset on top of a peach dress.

Once the snaps hit the web, Kanye West‘s wife was immediately slammed for dressing her four-year-old in suggestive and inappropriate attire.

On Wednesday night, the reality TV queen took to Twitter where she denied any wrongdoing. In a video, she says North wasn’t wearing a corset; it was decorative fabric that gave the illusion of one.

“This dress that I did not design, I actually bought, is not a corset. It’s just fabric on the front that looks like a corset… I think it’s really cute. I bought it from a designer. It’s just fabric, people. It’s not a real corset.”

To hear her full explanation, ch-ch-check out the clip (below)!

I would never put my daughter in a corset!It’s a dress I bought that is a cotton fabric that laces up & looks like a corset! Just decoration pic.twitter.com/hZzZLs04sM
— Kim Kardashian West (@KimKardashian) July 13, 2017