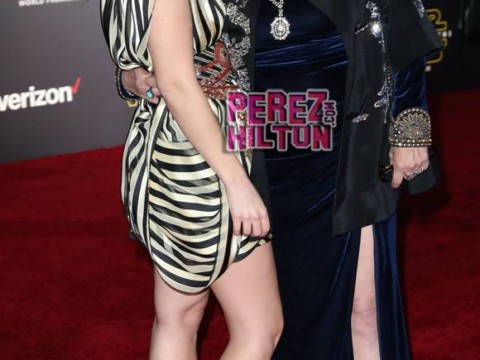 Ever since Carrie Fisher suddenly passed away this last December, there have been many beautiful tributes in her honor.

The latest comes from Disney and her daughter, Billie Lourd.

The late Star Wars actress was posthumously honored at the D23 Expo with the Disney Legends Award, which is the highest honor The Walt Disney Company can give to a person.

In yet another touching moment, Billie wrote an acceptance speech on Carrie’s behalf — which was read by Disney chairman Bob Iger:

“As far back as I can remember, my mom and I have been Disney fanatics. I was so obsessed with Ariel that I wanted to change my name. We went to Disneyland so much that I now realize she might have even loved it more than I did. Becoming part of the Disney family was truly an amazing moment for her. She secretly always wanted to be a Disney princess, so getting to be a Disney princess and a Disney legend would have been her ultimate dream. I wish I could be there to accept this award on her behalf, but unfortunately, I am currently working on American Horror Story. I am beyond grateful to Mr. Iger and everyone at Disney for this incredible honor. Thank you again, and may the force be with you always.”

You can watch the tribute to Carrie (below).

You Fucked Up Bad, Billy McFarland — Fyre Festival Founder Arrested And Charged With...