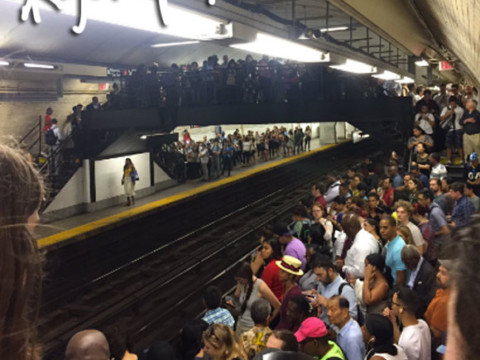 Talk about a rough Monday.

Commuters in NYC were in for another rude awakening this morning when a trash fire spread to the tracks and caused major blockages and delays for thousands of MTA riders from Brooklyn to Manhattan.

This was a really serious situation as we’re hearing 11 people were injured during rush hour, and they were sent to the hospital for their injuries. Yikes.

Related: Kris Jenner Is Living Her Best Life On Vacation

According to NBC New York, “service on the B and C lines was completely shut down in both directions for two hours, as was A and D train service above 125th Street.”

Take a look at the chaos people were dealing with (below):

This was 181st St #1 station waiting to get to elevator to gondownbtonget train because track fire on A train. 🙁 Fix this mess! #MTA pic.twitter.com/SGugnBh7gE
— Robert Jackson (@RJackson_NYC) July 17, 2017

Meanwhile… the rest of us in LA are like: