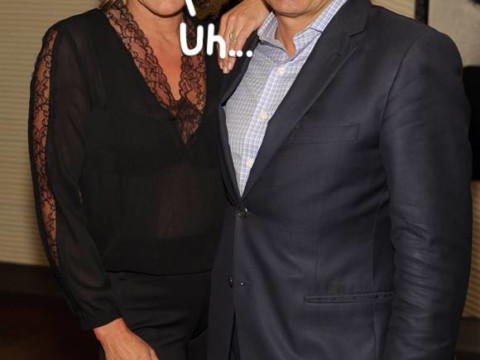 According to Page Six, the twosome got into a physical altercation last week while dining at a fancy restaurant in Manhattan. It’s said that, at one point, the Countess even slapped her husband across the face. Yikes.

We can’t say we’re surprised to hear there’s drama in Luann’s marriage as their engagement was riddled with scandal. Not only has Tom dated two of de Lesseps’ RHONY costars, Ramona Singer and Sonja Morgan, but the businessman was also caught kissing his ex-girlfriend at the Regency Hotel the NIGHT BEFORE his and Luann’s engagement party.

Apparently, the pair have been fighting quite a bit and have quietly split (and gotten back together) several times. One insider told the publication:

“It isn’t exactly a match made in heaven. He hates the whole reality [TV] thing, he doesn’t want the attention or the scrutiny.”

Well, he probably should have thought about that before rushing into marriage with a Bravolebrity. Another tipster added:

“There has been friction from the start. They got married so fast, they didn’t really know each other. She’s a drama queen.”

But this isn’t news to anyone, right? Like, Luann is a Real Housewife, it’s her job to be dramatic.

Despite the romantic hiccups, the duo reportedly hope to work through their issues. If they can’t, all we can say is… we hope there’s a prenup!

Prince William Can’t Make A Pretzel To Save His Life! Watch His Failed Attempt...