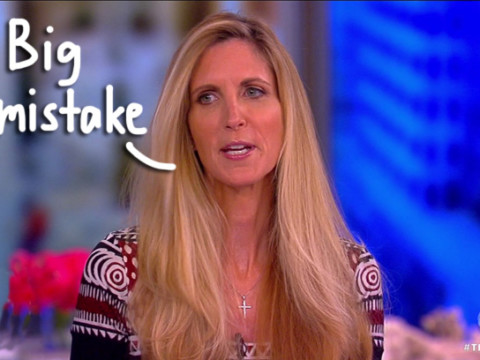 Ann Coulter wants everyone to know that we’re STILL mad at airlines!

Specifically Delta Airlines, which was the subject of a turbulent Twitter tantrum from the political pundit after a not-so-great flight experience over the weekend.

It all began Saturday afternoon when the conservative launched the first of 32 (and counting!) fiery tweets at the company after she was moved to a more cramped seat than the one she paid for!

Related: Ann Is Jumping Off The Trump Train!

The experience was definitely complaint worthy; the 55-year-old said she was moved from her pre-booked, pre-paid seat with extra room to a more cramped seat on a flight from New York City to West Palm Beach, Florida.

But because she’s Ann Coulter, the tweets were filled with unnecessary insults to the flight attendants, employee training, and even the “dachshund-legged” woman who took her original seat.

Here’s just a few of the over-the-top tweets she fired off:

Just when you think it’s safe to fly them again, the worst airline in America is STILL: @Delta
— Ann Coulter (@AnnCoulter) July 15, 2017

“Why are you taking me out of the extra room seat I specifically booked, @Delta?’ Flight attendant: “I don’t know.” pic.twitter.com/a0M1faZXMu
— Ann Coulter (@AnnCoulter) July 15, 2017

Also, @Delta, your wifi doesn’t work — probably to prevent passengers from tweeting from the plane about how they’re being treated.
— Ann Coulter (@AnnCoulter) July 15, 2017

The tweets only got sassier from there:

.@Delta employee questionnaire: What is your ideal job: Prison guard? Animal handler? Stasi policeman? All of the above: HIRED!
— Ann Coulter (@AnnCoulter) July 16, 2017

Hey @Delta, if it was so important for the dachshund-legged woman to take my seat, she should have BOOKED THE SEAT IN ADVANCE. Like I did.
— Ann Coulter (@AnnCoulter) July 16, 2017

No one would think that 28 hours (& counting) for an explanation is due to @Delta‘s incompetence. @Delta employees MUCH too talented! https://t.co/euJP9GFZa1
— Ann Coulter (@AnnCoulter) July 16, 2017

Oh, so that’s what it would look like if Donald Trump was articulate and had more time on his hands!

After receiving disparaging tweets for more than the span of a cross-country flight, the airline responded to Coulter on Sunday night, writing:

@AnnCoulter Additionally, your insults about our other customers and employees are unacceptable and unnecessary.
— Delta (@Delta) July 16, 2017

All that fuss over $30? Clearly times are tough…

Ch-ch-check out Delta’s full statement on the matter (below)!

“We are sorry that the customer did not receive the seat she reserved and paid for. More importantly, we are disappointed that the customer has chosen to publicly attack our employees and other customers by posting derogatory and slanderous comments and photos in social media. Her actions are unnecessary and unacceptable.

Each of our employees is charged with treating each other as well as our customers with dignity and respect. And we hold each other accountable when that does not happen.

We will refund Ms. Coulter’s $30 for the preferred seat on the exit row that she purchased.”

Shit Stirrer Ann Coulter Is In A Non-Stop Twitter Beef With Delta Airlines — They Claim Her Tirade Is ‘Unnecessary & Unacceptable’! LOOK!

Halloween Costumes EVERYONE Should Avoid This Year!

RHOA Star Kenya Moore Reveals Her Grandmother Has Passed Away

A Karate Kid TV Sequel Is Happening On YouTube & People Aren’t Sure What...