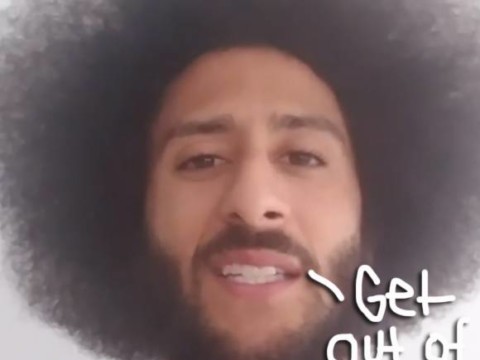 Sounds like Colin Kaepernick isn’t here for any advice Michael Vick has to give!

In case you missed it, the retired NFL star and dog abuser suggested the former San Francisco 49er cut his hair if he wants to land a spot on another team.

Related: Colin Plans To Stand For National Anthem Next Season

He explained on Monday’s episode of FS1‘s Speak For Yourself:

“First thing we gotta get Colin to do is cut his hair. I’m not up here to try to be politically correct, but even if he puts cornrows in there. I don’t think he should represent himself in that way in terms of just a hairstyle. Just go clean cut, you know? Why not?”

“I just think perception and image is everything, and listen, it’s not the Colin Kaepernick that we’ve known since he entered the National Football League. And I’m just going off my personal experiences, but I love the guy to death and I want him also to succeed on and off the field. And this has to be a start for him.”

The 37-year-old later clarified his comments on Twitter on Tuesday, writing:

Still, it seems like Colin took offense to Vick’s words as he went on the same social media site an hour later to with the definition of “Stockholm Syndrome”! The shade!

The 29-year-old didn’t reference Vick or the interview, but it seems pretty clear who he’s aiming this at!

Do U think Colin has a point?? Watch the controversial clip (below) and let us know what U think!

“First thing we got to get Colin to do is cut his hair.” — @MikeVick advises Kaepernick on rebuilding his image pic.twitter.com/YENvUPOIgP
— Speak For Yourself (@SFY) July 17, 2017

Colin Kaepernick Is NOT Here For Michael Vick’s Comments About His Hair Length OR His Clarification!