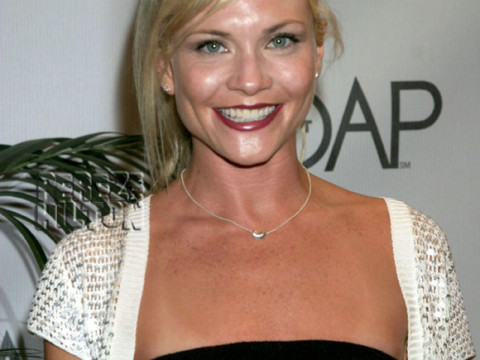 What a tragic story.

As you may recall, back in 2012, former Melrose Place star Amy Locane was convicted of vehicular manslaughter and assault with an auto after killing a 60 year-old NJ woman and severely injuring her husband while driving drunk two years prior.

Now, the former actress is speaking out about the incident and her time in prison for the first time since serving a three-year sentence — one many feel was way too short.

Talking to EW, the 45-year-old mother-of-two says she “can’t even recall how many I had” when referring to the amount of wine she drank (as a way to “cope with her problems”) before hopping into her SUV and crashing into a Mercury Milan driven by Fred Seeman, and killing his wife Helene who was in the passenger seat. Fred was left with broken ribs and a punctured lung.

Related: PLL‘s Troian Bellisario Once Lived Off 300 Calories A Day

Locane had a blood alcohol level of .26, which is more than three times the legal limit. Police testified that she was found in a ditch giggling, something she attributes to:

Her soon-to-be-ex husband Mark Bovenizer (the couple officially split in 2015), said of the sad situation:

“The worst night of my life was when I had to tell the kids that their mother wasn’t coming home.”

Locane now works in a home and garden store, goes to AA, and visits schools to talk about the harmful consequences of drinking and driving.

But her case is far from over as the state is appealing her sentencing and Seeman is suing her (along with a few other involved parties) in civil court.

Of her life after prison, Locane tells the outlet:

“It was the biggest mistake I ever made in my life. I understand how people would feel animosity toward me. It’s not an easy thing to go out and talk to these kids. But they say if you reach just one person, then you have tried to make the situation a little better. I mean, it will always be a horrible situation.”

“While it has been a long ordeal for the Seeman family, they remain resolute in seeing Ms. Locane and any other responsible parties brought to justice.”

For now, it could be a matter of months or even a year until Amy finds out if she has to go back behind bars if her sentencing is successfully appealed. And then there’s always whatever happens with Seeman’s civil trial.

At the end of the day, though, she knows there’s no one else to blame but herself:

“If you compare my uneasiness to the enormity of what happened, no one is going to feel sorry for me.”

Just devastating across the board.

One Woman Charged With Felonies After Protesters Tear Down Confederate Statue — Now Dozens...