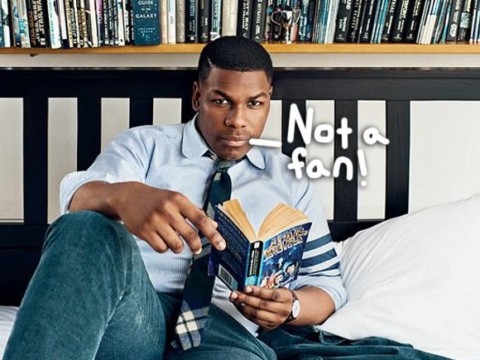 Forget winter, John Boyega has come for Game of Thrones.

For his cover story interview with GQ, the Star Wars: The Last Jedi star openly criticized the lack of diversity in Hollywood as he called out fantasy producers for not casting black actors in projects. Oh snap!

Video: Go Behind The Scenes Of Star Wars: The Last Jedi

The up-and-comer didn’t hold back as he noted:

“There are no black people on Game of Thrones. You don’t see one black person in Lord of the Rings. I ain’t paying money to always see one type of person on-screen!”

While the 25-year-old isn’t 100% accurate in his claims, Boyega has brought up a topic which has recently caused controversy in Tinseltown. Does anyone else remember #OscarsSoWhite?? We do.

John, who was the Star Wars franchise’s first major black protagonist in some time, clearly feels there is a racism problem in the industry as he continued:

“Because you see different people from different backgrounds, different cultures, every day. Even if you’re a racist, you have to live with that. We can ruffle up some feathers!”

Nonetheless, we’re sure GoT fans will point out that the characters Missandei and Areo Hotah are played by black performers, named Nathalie Emmanuel and DeObia Oparei. Not to mention, Jacob Anderson (Grey Worm), Lucian Msamati (Salladhor Saan), and Nonso Anozie (Xaro Xhoan Daxos) all appear in the GoT series.

Still only a handful of black actors have been tapped for roles in a show that almost has TOO MANY characters. Smh.

We have a feeling John’s sentiment will cause Star Wars fans and GoT fans to butt heads. Eek!

Star Wars’ John Boyega Takes Shots At Game Of Thrones Over Their Lack Of Diversity!

MGM Grand Detroit ‘Inundated With Calls’ Of People Wanting To Stay In Room Where...