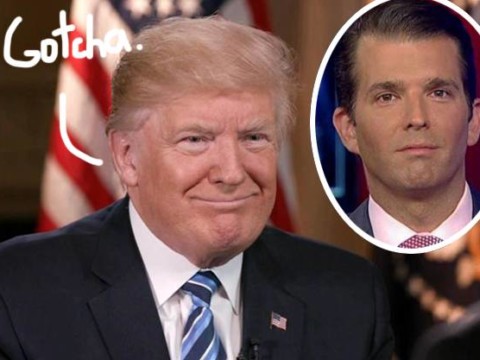 If you were curious just how much Donald Trump‘s supporters had become brainwashed, Public Policy Polling has the answer.

The week after Donald Trump Jr. himself released the email proof that he took a meeting with someone who wanted to give him damaging material on Hillary Clinton on behalf of the Russian government, a full 32% of Trump supporters say it didn’t happen.

Video: Seth Meyers Is Back To Laugh At Bad Handshakes & WORSE Legal Defense!

Not that it wasn’t as bad as the media is making out, not that it was justified — they’re saying they don’t even believe it fucking happened. The meeting Trump Jr. openly admitted to.

What will it take for these people to open their eyes? We mean, there’s willful ignorance and then there’s just flat-out denial!

81% still think no one on Trump’s team worked with Russia to help his campaign. Not only that — more Trump supporters think Russia wanted Hillary to win, at an insane 44% to just 26% who believe the Russians supported Trump!

Furthermore, even if evidence were found that Trump colluded with Russia, 77% say he should stay in office anyway!

But forget Russia for a second. Let’s just talk about blind support.

Remember when Trump said he “could stand in the middle of Fifth Avenue and shoot somebody” and not lose voters? It’s not that much of an exaggeration. 45% of Trump voters say they would still approve of him.

Let’s just stop and think about that for a second.

NEARLY HALF (presumably the same 45% who don’t even believe Trump Jr.’s own email admission) of Trump voters say they’re OK with him committing senseless murder.

Another 26% say they don’t know one way or the other. Presumably those ones need to know the victim’s skin color before they make up their minds.

The good news comes from the results when ALL voters were polled.

A consistent majority trusts the news media over Trump, 61% still think he should release his tax returns, and 57% are against the stupid fucking wall.

Oh yeah, 68% of voters say they would favor laws requiring the redrawing of legislative districts in a non-partisan way. So there’s that.

What do YOU think about these poll numbers??

Kevin Hart Speaks More On Allegations That He Cheated On His Pregnant Wife —...