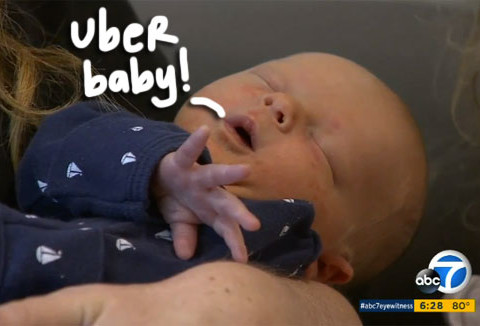 Hopefully this guy gets a five-star rating!

Uber driver Raymond Telles was in for a bit of a surprise on Friday night when his passenger Erica Davidovich‘s water broke in his backseat!

Erica and her husband, Niv — who did not want to drive on the Jewish Sabbath — used the ride-share app to get to the hospital when Erica went into labor, but they didn’t make it two miles into the trip when Telles had to pull into an El Lay grocery store parking lot to help deliver the baby boy.

The momma said of the easy delivery:

“I didn’t push. Nothing happened. Somehow, the gravity, the baby just slid out. My incredible husband caught the baby.”

Meanwhile, Telles was on the phone with 911 trying to get paramedics to the scene.

He said of the whole situation:

“I was actually calm, very calm. I kind of freaked out a little bit once I turned around and saw that the baby was out.”

The LAFD confirmed on Facebook that Telles was the primary assistant in “the successful delivery of a newborn in the vehicle.” Aww!

Telles got to see the family — which also includes three daughters, Chana, 5, Rivka, 3 and Elisheva, 1 — on Monday, where he gifted them with an Uber onesie. Ha, so adorable.

Watch the family and Telles reflect on what happened in the ABC 7 clip (below)!!