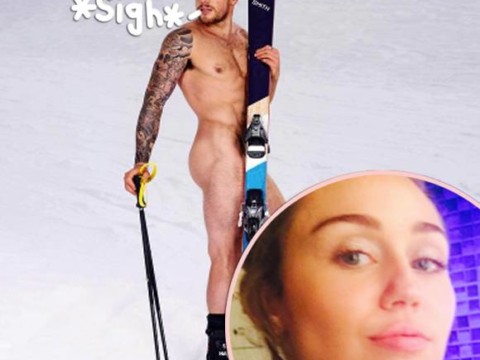 Gus Kenworthy was conflicted AF after making out with Miley Cyrus.

The openly gay Olympian admitted this during his Tuesday appearance on the Allegedly podcast. Apparently, the freestyle skier’s encounter with Miz Cyrus started with a comment the athlete made during a panel while at the 2014 Winter Olympics in Sochi.

When asked which A-lister he’d like to get with, Kenworthy wasn’t sure what to say as Russia has several anti-LGBT policies in place. The 25-year-old explained:

“I was sitting there like, ‘Do I say Zac Efron or Jake Gyllenhaal and play it off like I’m joking?’ I didn’t know what to do and so I was like, ‘Um … Miley Cyrus.'”

Somehow Gus’ comment got back to the Malibu singer, who reached out to the silver medalist via Twitter. Kenworthy continued:

“Miley tweets me back and follows me and starts messaging me and I’m like, ‘Oh, my God, this is fucking crazy. We’re friends and she’s a gay icon.'”

LOLz. The then single Miley went on to invite Gus and his pals to her 2014 Bangerz Tour stop in Denver, Colorado. The concert was more than just a meet and greet as Cyrus and the celebrated skier took their friendship to another level. The Brit dished:

“[My friends and I] all went to the show and then partied with her afterwards and it was really cool. We never slept together. I had the opportunity, but we had a makeout. It was great! She’s really, really sweet and I’ve hung out with her a few times since. She’s back with Liam [Hemsworth]— she wasn’t at that time — and I got to meet him a couple of times and they’re great.”

While Gus “enjoyed” his encounter with Miley, something just didn’t feel right about the situation. Remember, the British competitor didn’t come out until 2015. Gus added:

“I had fun, but I also felt like really crazy guilty afterwards. And I wasn’t sure if it was because I was maybe doing something that was like, ‘Does everybody feel guilty after doing this? Or is it because I’m gay and really hiding it?’ But I was able to do it and enjoyed it kind of. And I also felt like it was what I was supposed to be doing.”

Talk about a crisis of confidence! Nonetheless, these days, Gus couldn’t be more confidant in his sexuality as he’s currently enjoying a “kind of” open relationship with Matthew Wilkas. In regards to his relationship status, the athletic cutie noted:

“We’re [interested in exploring] other people. If there’s an opportunity we’re both open for that and we’re very communicative about it. He’s really easy to get along with. He’s like the sweetest guy, honestly. He’s super funny. It’s long-distance so it poses challenges, but we make it work.”

Cool, so where do we send our digits?? KIDDING!

Be sure to ch-ch-check out Gus’ full interview for yourself (below)!