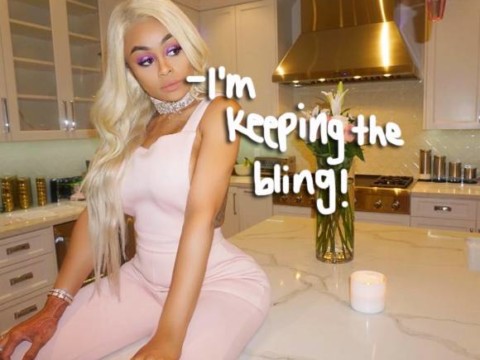 In a new piece from her chat, the 29-year-old explained what really went down with the gifts the Kardashian claims he bought her. First off, she kept the tennis bracelets he purchased because she “liked them,” but everything else was returned:

“I gave back Rob’s jewelry because I feel as though I can’t be bought. I’m not going to let [him] hang something over my head anymore. I also read that he said that he took the cars back. No, he did not. Those cars were leased, and I was going to have to give them back anyway. But the day he posted all that stuff, I had two of my assistants drive the cars over to his house along with the jewelry, along with my engagement ring. You know what? I didn’t even ask Robert for anything back. I’d actually bought him a Range Rover.”

We doubt Rob will be returning that Range, but who knows! Maybe he’s going to just to make a statement now??

And for anyone who thinks the momma of two is just out for money, she’ll have you know she’s FULLY capable of making it on her own:

“I make my own money. I’ve been making my own money for a very, very long time. My first job was at McDonald’s when I was 15. Years later, right after I had King, I wanted to do something that expressed myself, so I started Lashed Cosmetics. The lipsticks, the full skincare line, the beauty bar and 88Fin clothing trickled down from that. Nobody supports me at all. If anything, I’ve gotten other people more money …. I’ll leave it at that.”

Ooh, sounds like there’s some tea there, but she didn’t elaborate more though.

Chyna did talk about her plans for co-parenting Dream Kardashian with her controversial baby daddy, despite the temporary restraining order:

“I feel that the key to successful co-parenting is communication and respect.”

As you surely know, the starlet also shares a son, King Cairo, with ex Tyga, who she is also working with to raise their child together:

In the meantime, Dream seems to be doing great as Chyna described her as a “happy baby” who is “always dancing and smiling”:

“She’s learned how to say ‘bye-bye’ and has three teeth now!”

“I love watching them grow and seeing them do the funniest things. They just remind me of myself.”

The makeup maven also mentioned she already has plans for Dream and King’s education:

“I feel a lot of people in the spotlight put their kids in a bubble and that’s what messes them up. My kids are going to go to a public school, just to have that normalcy. I feel that when you put someone in a shell, it’s just not healthy.”

In that case, Rob and Tyga will probably have to agree!

Hopefully they can all successfully co-parent together!