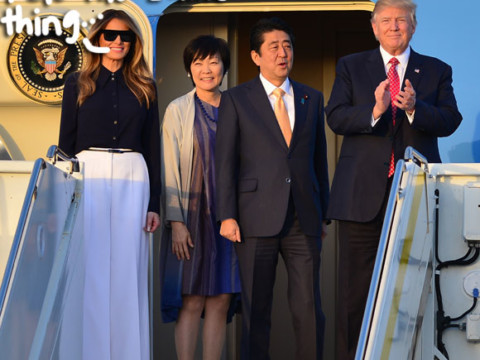 Reports are surfacing on Thursday suggesting the First Lady of Japan, Akie Abe, pretended not to know English so that she wouldn’t have to engage in conversation with Donald Trump! We can’t say we blame her, if true!

In a new interview with The New York Times, POTUS told Maggie Haberman that he had a bit of an awkward dinner at this year’s G20 summit in Hamburg because he was seated next to Mrs. Abe for hours, and she “doesn’t speak English.”

In fact, Donald said she doesn’t even know how to say “hello”!

But, thankfully for the Internet, we have proof that Akie not only knows English, but she’s extremely well-versed!

Here she is giving a keynote address at the High-Level Symposium on Coastal Resilience a few years ago (below):

Looks Like The First Lady Of Japan Pretended Not To Know English So She Wouldn’t Have To Talk To Donald Trump!