Celebrities Latest
Home Aaron Carter Game Of Thrones Producers Respond To Backlash Over Their Next Show Being... 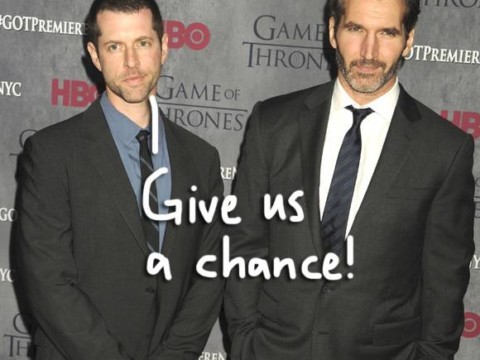 Watch before you hate!

That’s what Game of Thrones showrunners David Benioff and D.B. Weiss have to say to the critics of their next HBO drama Confederate.

The freshly announced project imagines a modern-day America where slavery is still legal and has evolved into a modern institution. The show will follow characters on both sides of the “the Mason-Dixon Demilitarized Zone” in the events leading to the “Third American Civil War.”

Video: GoT Star Gets WAY Too Into Shipping His Own Character!

Needless to say, not everyone was hooked by the modern slavery concept — especially from two white producers whose current show has been called out for a lack of diversity.

Some critics were so appalled, they accused HBO of making a show that sounds like a white supremacist fantasy!

But Benioff and Weiss — along with producers Nichelle Tramble Spellman and Malcolm Spellman — are telling haters to slow their roll, calling the backlash “a little premature” in a new interview.

Speaking to Vulture on Thursday, the writers said no scripts for Confederate have even been written yet, and people should watch the premiere before they decide whether the concept offends them or not. Benioff noted:

“So everything is brand new and nothing’s been written. I guess that’s what was a little bit surprising about some of the outrage. It’s just a little premature. You know, we might fuck it up. But we haven’t yet.”

While many critics were uneasy about Benioff and Weiss tackling this subject as white men, the project has the Spellmans on board, two prominent writer-producers of color, who both said audiences should wait for premiere night to judge the final product.

“I do understand their concern. I wish their concern had been reserved to the night of the premiere, on HBO, on a Sunday night, when they watched and then they made a decision after they watched an hour of television as to whether or not we succeeded in what we set out to do. The concern is real. But I think that the four of us are very thoughtful, very serious, and not flip about what we are getting into in any way. What I’ve done in the past, what Malcolm has done in the past, what the D.B.s have done in the past, proves that. So I would have loved an opportunity for the conversation to start once the show was on the air.”

Malcolm added that there are “no sell-outs” involved with the series, but people who “feel a need to address issues.” He said of the hate:

“You cannot litigate this on Twitter. It’s not possible. I don’t know that we can change anyone’s mind… but what people have to understand is, and what we are obligated to repeat in every interview is: We’ve got black aunties. We’ve got black nephews, uncles. Black parents and black grandparents. We deal with them every single day. We deal with the struggle every single day. And people don’t have to get on board with what we’re doing based on a press release. But when they’re writing about us, and commenting about us, they should be mindful of the fact that there are no sell-outs involved in this show. Me and Nichelle are not props being used to protect someone else. We are people who feel a need to address issues the same way they do, and they should at least humanize the other end of those tweets and articles.”

Confederate is said to follow “freedom fighters, slave hunters, politicians, abolitionists, journalists, the executives of a slave-holding conglomerate, and the families of people in their thrall.” The drama series is expected to start production after the eighth and final season of Thrones airs in either 2018 or 2019.

Do YOU think a show about modern day slavery would work?

Game Of Thrones Producers Respond To Backlash Over Their Next Show Being About Modern-Day Slavery!