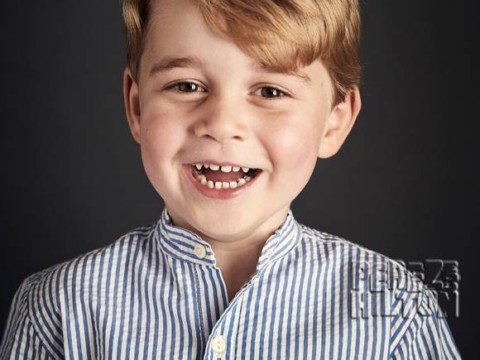 We can’t get over THAT SMILE!

On Friday, the day before Prince George‘s birthday, the Royal Family released the cute toddler’s official portrait and it’s EVERYTHING! Wearing a striped button-down shirt, Prince William and Kate Middleton‘s son looks like a natural in front of the camera!

Related: The Royal Family Couldn’t Be Any Cuter

According to a statement:

“The Duke and Duchess are very pleased to share this lovely picture as they celebrate Prince George’s fourth birthday, and would like to thank everyone for all of the kind messages they have received.”

The snap was taken at Kensington Palace in London, England at the end of June. Photographer Chris Jackson exclaimed:

“I’m thrilled and honoured that the Duke and Duchess of Cambridge have chosen to release this portrait to celebrate Prince George’s fourth birthday. He is such a happy little boy and certainly injects some fun into a photoshoot!”

Just like sister Princess Charlotte, the British brood have released official pics for every one of the infant’s birthdays.
HBD, little George! We hope your day is SUPER special!