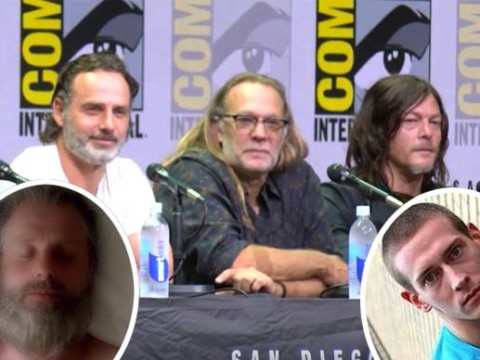 It’s been a rough week for The Walking Dead — so much so they considered canceling their appearance at San Diego Comic-Con altogether.

Instead, according to moderator Chris Hardwick, the cast decided to carry on their tradition for the fans.

Hardwick, who also hosts aftershow Talking Dead, began the Fear The Walking Dead panel with a moment of silence for stuntman John Bernecker, who passed away last week after a stunt gone wrong.

“John passed away this week after he was injured doing something he loved: helping tell stories that excite, entertain, and give people escape. He helped make movies and shows for people like everybody in this room. John was someone who was beloved in the stunt community, who helped train people and helped them break into the business He was living his dream, and he helped other people do the same.”

On the brighter side, much of season 8 has already been filmed, plenty to fill a huge 5 minute trailer, which was shown to the packed Hall H.

Luckily for fans who couldn’t make it to San Diego this year, AMC released it online immediately following:

You can see highlights from the bittersweet TWD panel (below):