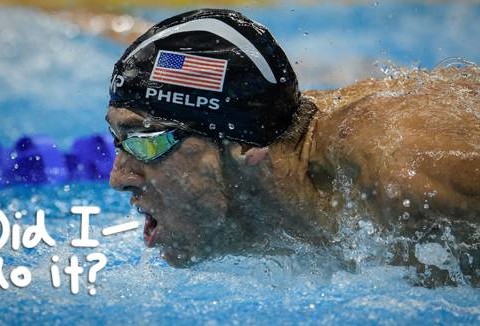 Michael Phelps HAS to be part shark.

We mean, the Olympian can’t be human, especially after he raced against a number of sharks for Phelps vs Shark: Great Gold vs Great White. Okay, so the gold medalist didn’t ACTUALLY race alongside a Jaws type beast, but his swimming skills were tested next to virtual versions of certain sharks.

Now, the Discovery Channel made it perfectly clear that Phelps wouldn’t be swimming side-by-side with live sharks during the Shark Week race, yet fans were still baffled by the situation. Many noted on Twitter:

When Michael Phelps said he was gonna race a shark this is how I pictured it happening #SharkWeek pic.twitter.com/GiEfJssNhL
— Ryan Homler (@RHomler) July 24, 2017

I know it’s stupid to think michael phelps was actually going to be racing against a real shark but I’m stupid and upset
— Nicole (@nicoleee_adams) July 24, 2017

Me pretending to be ok with Michael Phelps not racing a real shark pic.twitter.com/QnCF98NfBB
— Gabi Palamone (@Yo_Gabi_Gabi__) July 24, 2017

Nonetheless, the American athlete put on quite the display as he rocked a monofin and a specially designed wetsuit to take on certain sharks’ swim times. While the celebrated sportsman beat a reef shark with a time of 18.7 during a 50-meter race, he came second to a hammerhead who had a time of 15.1. Bummer!

So, obviously, when it came to his race with the great white shark, Michael didn’t walk away victorious. Although, the 32-year-old only lost by two seconds!! Be sure to ch-ch-check out the footage for yourself (below)!

Michael Phelps Gave It His All While Racing A Great White Shark — But Was It Enough?