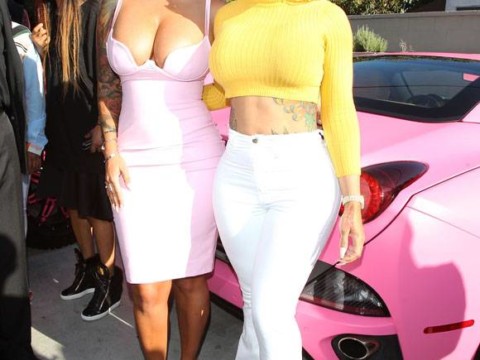 Amber Rose is holding it down for her bestie Blac Chyna!

While sitting down with Joe Budden, DJ Akademiks, and Nadeska Alexis during Complex‘s Everyday Struggle (released Tuesday), the 33-year-old commented on Chyna’s drama with Rob Kardashian, being “bullied” by Kanye West, and her new relationship with 21 Savage.

On the KUWTK star’s rocky relationship with his baby momma, Rose said:

“Chyna is an amazing mom. She’s an amazing person, she’s extremely loving. I was around when her and Rob first met, and I’ll tell you first hand that they very much loved each other…I watched it. They both wanted to have Dream Kardashian. It wasn’t a mistake. It wasn’t an entrapment. It wasn’t anything like that.”

Related: Chyna Is Heading Back To The Strip Club!

The former stripper went on to argue:

“You know, people look at Chyna and they just go, ‘Oh she got Rob’s everything—child, she’s taking Robs money.’ [But] she’s not that type of person, and neither am I. We’re not out trying to finesse mother f–kers. We have our own money! People fail to realize…me and Chyna got money, we’re straight. I remember when her and Rob met, how they fell in love and how happy they were. They’re just not happy anymore. That’s life, it just happens.”

As far as being bullied by Kanye for six years before she finally went head-to-head with him on Twitter, Amber said:

“The only thing that I got from him was fame, and fame don’t get you no fuckin’ money. Period. I had to figure out what I was going to do with the fame and with my life at that time.”

“During that time, it was not a great time for me because I’m famous, I’m broke, I can’t date anybody else, I can’t say anything on the internet because Kanye has such a voice … If I was to kill myself, I would have done it during those times.”

But now… she’s in a much healthier relationship with 21 and co-parenting with Wiz Khalifa:

“Me and my son’s father are really cool. We co-parent so well. We still very much love each other because we’re family forever, through Sebastian. We were married. But we’re in love with different people, and we’re very happy with those people as well. We’re just all really fucking happy, and our son is happy, so that’s the most important thing.”

Take a listen to all the dirt Amber had to dish in the full interview (below)!!