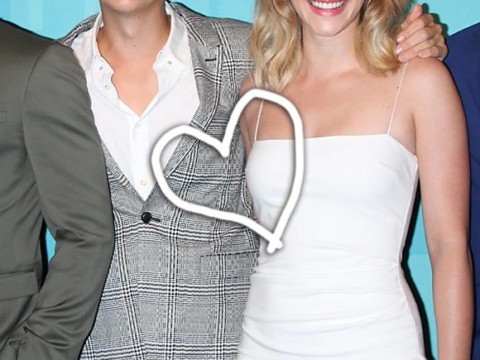 Move over, Archie! It looks like Jughead is Betty’s OTP both on AND off screen!

Yup, Riverdale‘s Cole Sprouse and Lili Reinhart have taken their on screen relationship into the real world as they’re totally a couple now. The twosome’s IRL romance was exposed after multiple eyewitnesses saw the costars getting cozy AF at San Diego Comic-Con. Apparently, the pair “could not keep their hands off of one another”!

LOVES it! While it’s currently unknown if the duo’s relationship is an exclusive one, a source dished to E! News:

“[Cole and Lili] were very open with their PDA at parties during the event, and close friends did not seem surprised.”

We’re sure fans of the CW drama are dying right about now. We know we are!

Per another tipster, Miz Reinhart “was mostly hanging out with the other Riverdale girls” while at one Comic-Con bash on Friday. Nonetheless, the insider claims the blonde actress “always had her eye on where Cole was.” Later in the evening, the rumored couple was seen talking closely by a pool. Well, well!

And despite their attempts at keeping a low profile, the eyewitness states it was clear that “something was going on” between the former Disney darling and the up-and-comer.

More PDA between the two was spotted as, on Saturday, the TV stars were seen “canoodling, holding hands, and kissing.” Ooh la la!

The entire cast has since flown back to the show’s set in Vancouver — where hopefully more canoodling is going on. LOLz!

The young actors were first romantically linked after Dylan Sprouse‘s twin photographed Reinhart in a field (below).

It’ll be inneresting to see if Cole and Lili publicly confirm their relationship, especially since Sprouse previously stated that he and the 20-year-old are “strictly in the friend zone.” Hmmm, we’ve got our eyes on you two…