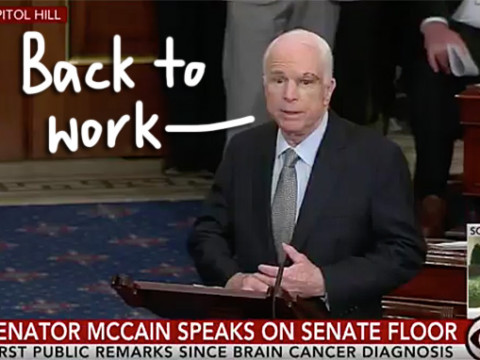 John McCain is back in good health — just in time to destroy American healthcare!

The Republican Senator made a triumphant return to the Senate on Tuesday, where he cast the tie-making vote on a procedural step in advancing the GOP’s plans to repeal and replace Obamacare.

After recovering from surgery in Arizona, McCain flew to Washington and was greeted by standing ovations on both sides of the Senate floor when he dramatically marched on the floor to cast the crucial vote.

The 80-year-old, who had just been diagnosed with brain cancer, voted “aye” on advancing the legislation to repeal the Affordable Care Act.

Earlier this month, the Senator underwent surgery to remove a blood clot at Mayo Clinic Hospital in Phoenix — which doesn’t sound too affordable, if you ask us. While most of Washington expected McCain to sit this one out and focus on his recovery, his vote was necessary to move the debate forward.

It’s important to note McCain did not vote for the bill “as it is today,” but encouraged the Senate to go back to the drawing board with hearings and discussions with Democrats — all things the GOP has been sneakily avoiding so far.

After casting the vote, McCain spoke from the floor and scolded his Republican colleagues, urging them to work with Dems on a bill that works for everyone. He declared:

“We are not the President’s subordinates. We are his equals.”

He’s the last crusty voice in politics, that’s for sure!

After singling out McCain in a personal Twitter response, Trump applauded the Senate for bringing us one step closer to ending “nightmare Obamacare.”

Watch the Senate erupt in applause upon McCain’s return (below) — and see what people had to say about the vote.

.@SenJohnMcCain-Thank you for coming to D.C. for such a vital vote. Congrats to all Rep. We can now deliver grt healthcare to all Americans!
— Donald J. Trump (@realDonaldTrump) July 25, 2017

John McCain left hospital stay paid by taxes on flight paid by taxes to remove health insurance from taxpayers. And we paid him to do it.
— Shannon Watts (@shannonrwatts) July 25, 2017

There’s a certain cruel irony of John McCain coming back to vote against healthcare, at a time when his life depends on having good care.
— Amy Siskind (@Amy_Siskind) July 25, 2017

John McCain is the Republican dream: a man with no empathy who gets to call himself a hero.
— Louis Virtel (@louisvirtel) July 25, 2017

Dems: John, give me the keys. Where are the keys? Babe, where are those keys??!!!

When you was praying for John McCain while he was praying to take away your healthcare pic.twitter.com/s2UPR71H8u
— Josiah Johnson (@KingJosiah54) July 25, 2017

We pay for Senator John McCain’s healthcare—He just voted to take ours away—Congress should be first to lose healthcare before any American.
— Scott Dworkin (@funder) July 25, 2017