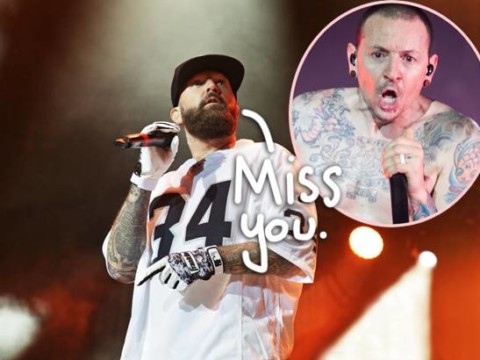 We’re still so shaken up over Chester Bennington‘s death.

As you surely know, Linkin Park fans were left devastated on Thursday (July 20) after the rock band’s celebrated frontman committed suicide by hanging himself. While the late father-of-six had a long history with addiction, it seems unlikely that drug usage played a part in the hitmaker’s passing.

According to TMZ, the investigation into Bennington’s death has turned up no obvious signs of drug use. Specifically, law enforcement sources close to the case claim that no illegal drugs or prescription drugs were discovered following a post-mortem sweep of Chester’s home. Nonetheless, per previous reports, only a partially consumed bottle of alcohol was found in the bedroom where the Numb singer took his own life.

As a toxicology report is still pending, it is too soon to know if Chester had any drugs in his system at the time of his death. Not to mention, Chester’s suicide suspiciously occurred on what would’ve been his pal Chris Cornell‘s 53rd birthday. In case you forgot, the In The End artist was heartbroken over the grunge rock god’s May suicide as they were very close. What a tragic situation.

We’re not the only ones devastated by these untimely losses as Limp Bizkit‘s Fred Durst has since opened up about Bennington’s death. The rap rocker paid tribute to Chester by penning an emotional letter in Tuesday’s Variety. He wrote:

“I can say so many wonderful things about the Chester I knew. He had a way of making anyone he spoke to feel heard, understood and significant. His aura and spirit were contagious and empowering. Often those types of people have so much pain and torture inside that the last thing they want is to contaminate or break the spirit of others.”

“He would go out of his way to make sure you knew he truly cares. As real and transparent as our conversations would be, he was always the one projecting light on the shadows. In my last conversation with him, he was holding his two cute puppies and giving me the most selfless and motivational compliments in regards to Limp Bizkit and myself and thanking me for paving the path for bands like Linkin Park.”

Talk about a moving memory. The 46-year-old concluded:

“I told him if it weren’t for him and his voice and his words, this genre would never have reached the masses and affected so many lives. I thanked him for being so courageous and humble and for always being such a gentleman. We laughed and hugged and told jokes as if there would always be a tomorrow for us to meet again. I want to hug him now and let him know that we all experience our own pain and deal with it our own ways. I know his torture is unique to him, but I would always be here to listen and help in any way I can. But I won’t get that hug and that moment now, which makes me so sad.”

Our thoughts are with everyone affected by Chester’s passing as we know this is an incredibly difficult time.