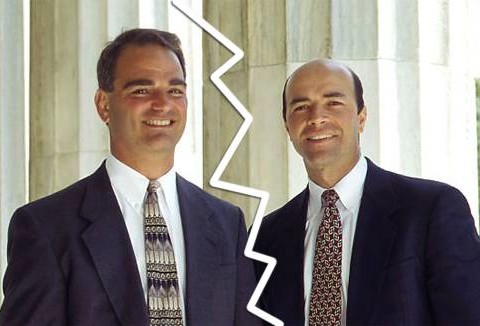 As if this breakup couldn’t get any worse…

In case you forgot, one of the biggest celeb splits to make headlines in 2017 had to do with the dissolution of famed law firm Cellino & Barnes. While it’s said the rift between the famed injury attorneys, Ross Cellino and Stephen Barnes, was over years of “hard feelings,” it appears as though things have taken an intense turn in this legal drama.

Related: Justin Bieber Accidentally Hit A Paparazzo With His Truck

Specifically, it’s said Barnes has filed for a restraining order against Cellino. Whoa.

According to legal paperwork from Monday, Cellino has been trying to poach Cellino & Barnes’ staffers for a new firm amid the old business’ dissolution. (Let us remind you that it was Ross who first hit Stephen with the lawsuit).

Apparently, the Cellino in Cellino & Barnes has been informing his former staff at the Buffalo, Rochester, Manhattan, and Long Island branches that his surname is more recognizable than Barnes’. Unsurprisingly, this has made Mr. Barnes mad AF as he’s come after his former partner for exhibiting “reprehensible conduct.” *Gulp*

Although, we should probably mention that Ross’ father founded the firm which eventually became Cellino & Barnes in 1958. Not to mention, the business has changed names several times over the years, but the surname Cellino has always come first.

Still, Barnes defends that Cellino’s actions “has caused and continues to cause catastrophic damage to C&B, its reputation, and its brand.” The legal filing also DRAGGED Ross for asking employees to “violate their duty of loyalty to the firm.”

And it appears as though the court has sided with Barnes on the poaching issue as State Supreme Court Judge Deborah A. Chimes has signed off on the restraining order which prohibits Cellino from messing with the firm’s “status quo.”

Huh. We have a feeling Ross is going to contest this decision.

What do YOU think?? Are you on #TeamCellino or on #TeamBarnes??

Vogue’s Anna Wintour Made A Dame By Queen Elizabeth II