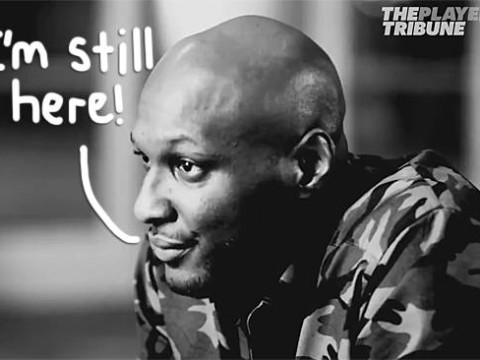 Lamar Odom is ready to tell his story.

There’s no denying that Khloé Kardashian‘s ex husband has been through a lot, especially after surviving a near death experience back in 2015. And while the retired NBA star has discussed his health scare a few times in the last couple years, it seems Odom is really ready to face everything he went through.

In fact, the basketball baller got candid about what it was like waking up from a coma in a poignant letter for The Players’ Tribune. Per Lamar’s note, emerging from a coma is a traumatizing experience as the 37-year-old shared:

“When I woke up in the hospital room in Nevada, I couldn’t move. I couldn’t talk. I was trapped inside my own body. My throat hurt like hell. I looked down and I had all these tubes coming out of my mouth.

So I panicked. I started trying to pull them out, but I couldn’t because my hands were so weak. The nurses came running in to stop me. You ever had a really bad dream, where you’re trying to run away from a monster or some shit, and you just can’t run? Your legs don’t work like they should, and the monster is coming right behind you, and it’s like you’re in slow motion. That’s what it felt like.”

How awful. Nonetheless, it wasn’t until Lamar saw KoKo that he knew he was in a bad state. He continued:

“My ex-wife was there in the room with me. After all the shit I had done, I was surprised to see her. Honestly, that’s when I knew that I was probably in bad shape. At some point, the main doctor came in and told me what had happened. He said, ‘Mr. Odom, you’ve been in a coma for the last four days. Do you understand?’

I couldn’t talk. So I just nodded. He said, ‘It’s a miracle that you’re here. We didn’t think you were going to make it.’ I was in total shock. Couldn’t say any clever shit back. Couldn’t ask questions. It was the first time in my life that I felt helpless. I felt like I was two inches tall. It was just … it was real.”

The doctors were certainly shocked to see Odom alive as he had suffered from 12 strokes and two heart attacks. This episode was clearly brought on by the American athlete’s rampant drug use. Specifically, the reality TV vet was abusing cocaine as he was using “every day.” Lamar admitted:

Intense stuff. Unsurprisingly, Lamar’s near death experience made him re-evaluate his life choices as he added:

“I think of all the sneaky shit I tried to get away with. All the times I did wrong. All the stuff I tried to hide. If it’s not in the public light, it’s in God’s light. I was laying there in that bed, hooked up to all these machines, people all around me crying, and there was no running from it anymore.”

Although Odom has taken responsibility for his actions, there are many hardships he went through as a kid and young adult that contributed to his mental health struggles. For starters, Lamar lost his mother at the age of 12, and then in his 20s, he lost both his grandmother and six-month old son Jayden.

Despite having only just tried cocaine, a then 20-something Lamar began coping with these death with excessive drug use. Kardashian’s first husband wrote:

“That’s the thing people don’t understand. Anybody who’s lived a complicated, drug-infused life like I’ve lived knows the cycle – with women, cheating on my wife … You think I wasn’t feeling shame? You think I was blind to what I was doing? Nah, I wasn’t blind to it.”

While the Las Vegas brothel incident was clearly rock bottom for the sports star, there were several moments along the way which took a toll on the controversial celeb. Most notably, the former New York native recalled:

“When I was like 32, 33 … I just wanted to get high all the time. That’s it, just get high. And things got dark as hell. One of the darkest places I’ve ever been was when I was in a motel room, getting high with this chick, and my wife (at the time) walked in. That probably was like rock bottom.”

Oof. Yet, it was the Las Vegas overdose which left him hospital bound and dependent on his loved ones. Now Lamar’s road to recovery has been a complicated one but, it seems that after finishing his latest stint in rehab, Odom is dedicated to living a full life. On his second chance, the A-lister stated:

“I shook hands with death. But you know what? Ain’t no coming back from that….Even though my funeral would probably be a good funeral, and there’d probably be a lot of people who hadn’t seen each other in a long time. But it ain’t time for that yet. … I still got my kids. I’m still here. And damn, I’m still pretty handsome.”

Be sure to read Lamar’s letter in its entirety HERE and get a taste of his confessions in the video (below).

“What’s done in the dark will come out in the light.”

[Image via The Players’ Tribune.]