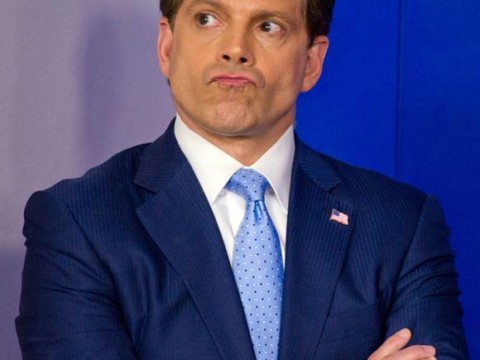 Amid the controversy the new White House communications has been stirring with his vulgar interviews, Page Six is reporting Deidre Ball has decided to file the papers after three years of marriage.

According to their sources, it was because of his “naked political ambition.”

That’s one way to put it!

An insider even dished:

“Deidre has left him and has filed for divorce. She liked the nice Wall Street life and their home on Long Island, not the insane world of D.C. She is tired of his naked ambition, which is so enormous that it left her at her wits’ end. She has left him even though they have two children together.”

Additionally, it’s said Donald Trump has been a source of contention.

“Deidre is not a fan of Trump, and she hasn’t exactly been on board and supportive of Anthony and his push to get back into the White House. Anthony is focusing on his children, his work for the president and the American people. There is nothing more important to him. I don’t know who Deidre thought she was marrying but anyone who knows Anthony knows he’s an ambitious man.”

We’ll continue to update you with new details.