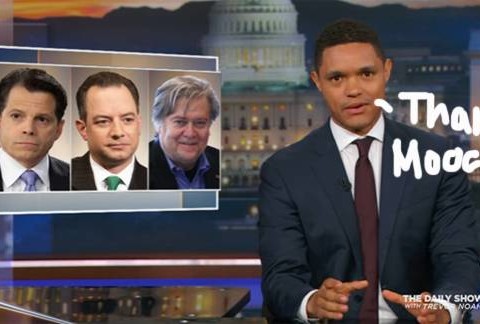 Anthony Scaramucci as the White House’s new communications director might just be the gift that keeps on giving!

On Thursday, late night hosts went IN on the political newbie and his recent comments, which made for some terrific commentary!

Stephen Colbert, Seth Meyers, and Trevor Noah didn’t go easy on the Mooch, especially after he dissed Steve Bannon so hard by saying, “I’m not Steve Bannon, I’m not trying to suck my own cock.”

You’ll have to hear how they went in on the “Wall Street guy” (below):

Meyers followed by pulling up a quote of Scaramucci saying he’d move to London if Donald Trump were elected President: