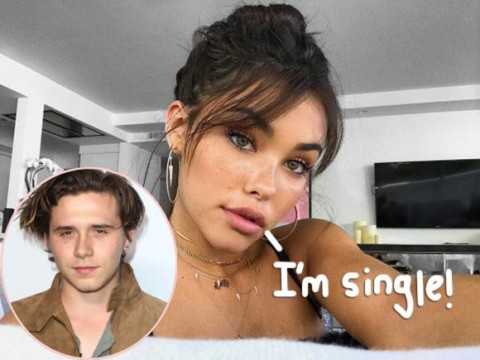 On Thursday, Madison Beer stopped by the BUILD Series and made sure to clarify a few things about her alleged romance with Brooklyn Beckham. For starters, there isn’t one…

While chatting about her current relationship status, the YouTube star noted:

This admission comes less than a week after romance rumors linking her to David Beckham‘s son made headlines. Sooo, what exactly is Miz Beer’s connection to the aspiring photographer. Well, per Madison herself, the duo are just “best friends.”

“He’s great, though, he’s a cutie, literally one of my best friends. It’s hard because now every time I’m seen with him people are like, ‘Oh my god, they’re boyfriend and girlfriend!’ But we’re seriously best friends. We hang out almost every day with our whole group of friends in LA together and he’s moving to New York soon, so we’re just having fun right now and rumors are going to get started.”

There you have it! Oh, and for those of you who jumped to conclusions about her romantic life, Madison wants you to know:

“Don’t attack a girl because you see one photo of her and a guy in public. You have no idea what this person’s doing behind closed doors. I’m also very open with my fan base and we’re all very close and I don’t feel like I have to hide anything from them…. And me and Brooklyn very easily could go through the back of place or we could do whatever, but I’m not sneaky and I don’t lie.”

Still, we can’t blame the 18-year-old’s fans for shipping the It-girl with Beckham. We mean, they’d make SUCH a precious power couple on the rise. LOLz!

Anywho, be sure to watch Madison’s confession for yourself (below)!