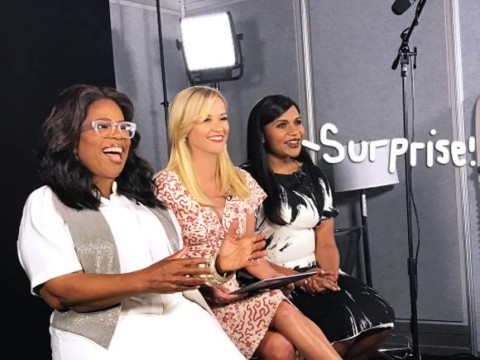 Mindy Kaling knows how to keep a secret!

We mean, The Mindy Project star left her Wrinkle In Time costar Oprah Winfrey practically speechless when she informed the icon about her pregnancy. This juicy tidbit was dished by non-other than Oprah herself, as she confirmed The Office alum’s baby news and opened up about how she learned the scoop.

Related: Mindy Has “Always Talked About” Being A Mom!

According to the media mogul, the 38-year-old broke the news to her while they were standing in line to do press at Disney‘s D23 expo earlier this month. The 63-year-old shared:

We wish we could’ve been a fly on the wall for THAT conversation. And Winfrey wasn’t the only one from the AWIT fam to be blindsided by the news as Reese Witherspoon and Ava DuVernay also learned the truth that day too. Oprah continued:

Talk about a truth bomb! Per the TV goddess, “none” of the Wrinkle team knew about the pregnancy until that very moment. Regardless, the businesswoman quipped:

Now we just need Oprah to pry the identity of the baby daddy out of Mindy. Don’t worry, we’ll wait…