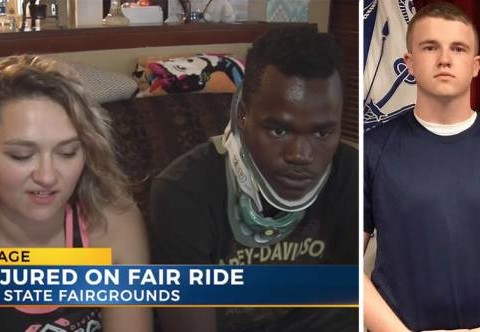 One of the eight victims of a deadly ride malfunction at the Ohio State Fair this week is speaking out after leaving the hospital.

Abdihakim Hussein told WCMH that Wednesday’s ride turned horror machine was his very first trip to a fair — and definitely would be his last.

The 19-year-old and his 20-year-old girlfriend Hannah Sallee had lined up for the Fire Ball just after arriving at the Columbus-based event with friends.

As the Fire Ball swung in its signature pendulum motion during the ride, the pair noticed the ground was creeping closer and closer to them. If that wasn’t scary enough, the employee running the attraction didn’t seem to know how to stop it.

“I’m sitting there scared, trying to get off and it’s still swinging. I’m looking at the dude like, ‘Are you going to stop this?’ And he didn’t know what he was doing, just clicking the button. Afterwards, he just ran.”

The first time rider said debris from the ride hit half of his body after the row of seats next to them collided with the barrier of the platform. Sallee, who sat next to him, barely missed getting hit.

Hussein said the ride kept swinging even after the collision which caused the death of one rider, remembering:

Hussein said half of his body went numb after being struck; he then had a seizure. At the hospital, doctors told him he had a small fracture on the back of his neck that might require surgery.

In the end, the two are thankful to be alive, as they originally were seated on the part of the ride that fell off mid-air. Hussein explained:

“That was us at the seat first, so if we never changed seats, it would have been us dead. Knowing somebody else died hurts, because everybody’s life matters.”

The victim who died in the accident was Tyler Jarrell (above, right), who had enlisted in the U.S. Marines just last week. South-Western City School District confirmed that the 18-year-old would have been a senior at Franklin Heights High School this fall.

The district said Jarrell was involved in the school’s NJROTC program as well as the South-Western Career Academy, where he studied cyber security.

What a tragedy. Our hearts go out to Tyler’s loved ones and all of the victims involved with this devastating accident.

Watch Hussein and Sallee’s relive the harrowing incident in an interview (below).