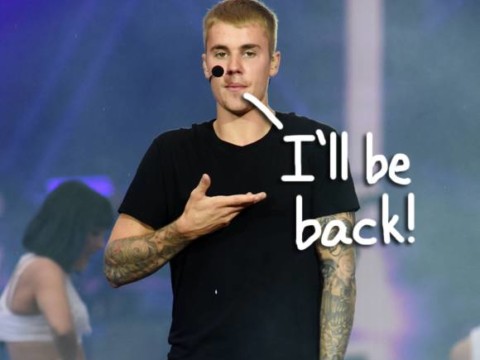 Sure, Justin Bieber may be in the middle of his own ‘spiritual awakening,’ as we’ve been reporting — but it sounds like it won’t effect his music career for very long.

Even though there was apparently a genuine concern in the industry that the Biebs might stop making music altogether to focus on his religion (or to start his own church?!), we can now say that concern appears to be unfounded.

According to a new report out this morning in TMZ, the Biebs has been reassuring his closest friends that he WILL return to performing soon!

Sources connected to the singer are saying that his faith isn’t going to stop him from being an artist, and he’s still reportedly in and out of studios working on new music even during his spiritual awakening.

He reportedly doesn’t have a date in mind yet for when to return, but he apparently has made it VERY clear to friends that he will return, and relatively soon.

PHP: Justin Bieber Has No Respect For His Fans!

It also sounds like he got burned out a little bit; the poor kid had been touring for nearly two full years at this point when he decided he needed the break, so perhaps when he does return he’ll find a slightly better work/life balance.

Whatever the case, here’s hoping Justin Bieber gets what he needs out of his spiritual awakening and finds himself in a better place personally, professionally, and emotionally very soon! Can’t knock the self-searching!