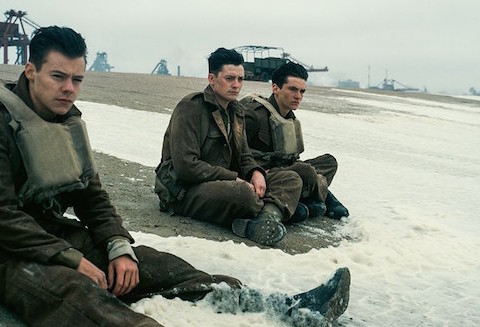 Another weekend, another new day at the box office!

Dunkirk is the biggest winner this week, thanks to a $28.1 million haul this week and a cumulative $102.8 million domestic pull through its second week on Sunday — and another $45.6 million overseas from 62 more markets.

The war movie has done particularly well in the United Kingdom, with a tally of $35.4 million this weekend — already surpassing the lifetime U.K. cume of director Christopher Nolan‘s last movie, Interstellar.

Meanwhile, The Emoji Movie — which had been getting brutally bad reviews from critics — didn’t do so hot in theaters but actually outshot some of its projections, taking in $25.7 million.

“We are thrilled the audience has spoken and embraced The Emoji Movie.”

Sony is seeing the film as a major victory, in part because it cost about $50 million to produce, which is a relative bargain for a major studio animated film.

But it still couldn’t get close to Dunkirk!!!

The other new release this weekend, Charlize Theron‘s Atomic Blonde, took in $18.6 million for Focus Features, a specialty company nestled under Universal Studios.

The $18.6 million showing — plus another $5.9 million from overseas — is actually a very solid showing for Atomic Blonde, which is based on the graphic novel The Coldest City and took a lot of chances in its production.

“This film takes a lot of chances. David takes action to another level, and Charlize Theron an unbelievable job being able to kick ass just likes the guys. This is a stylized, provocative, sexual and brazen film, which is why Focus got involved.”

Meanwhile, as far as older releases go, Girls Trip continues to do VERY well, taking in $20.1 million in its second outing for a domestic total of $65.1 million — by far the most successful live-action comedy move to date this year.

What about you, Perezcious readers?! Did you see anything in theaters this weekend??

Let us know what you saw in the comments (below)!!!

The Latest Trailer For Kingsman 2: The Golden Circle Is American AF!