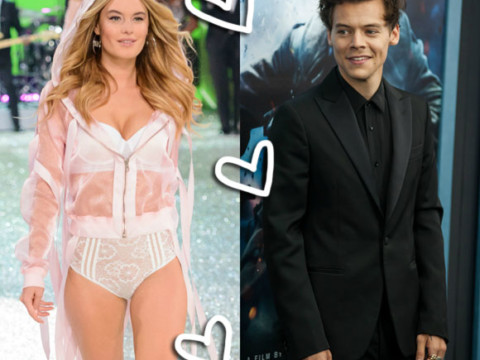 You might remember this 27-year-old beauty from her 2016 debut at the Victoria’s Secret fashion show, or those steamy Dior ads with Robert Pattinson!

Anyway, according to The Sun, the Dunkirk actor is quite “besotted” with Camille — a source told the outlet after the two were spotted in NYC together over the weekend:

“Harry and Camille are in the early stages of dating. He’s very protective of his relationships so isn’t going to want to make a big show of things. They are well suited and seem happy. She’s a real star on the rise. He seems besotted.”

Funny enough, though, a few weeks ago Harry stopped by the BBC1 Radio station for an interview with Nick Grimshaw, where he was hooked up to a heart rate monitor and shown pictures of various people, including Camille.

Although his number jumped when seeing a picture of Ryan Gosling (fair), it lowered when he saw a photo of Miz Rowe.

Hmmm… maybe he decided to go and find out for himself?!

What do you think of this potential pairing?? SOUND OFF in the comments (below)!