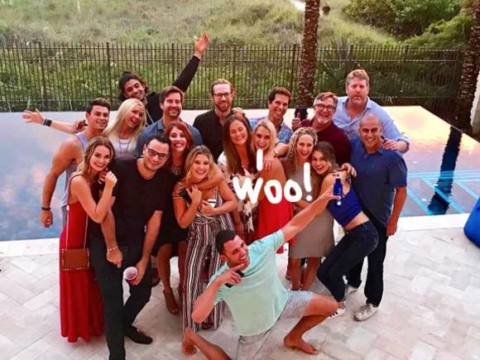 The champagne did NOT go to waste!

As we reported, the Siesta Key premiere party in Sarasota, FL was canceled after star Alex Kompothecras received death threats for being linked to a video where a hammerhead shark gets dragged to death.

Even with the animal cruelty allegations, the sexy men and women of MTV‘s latest reality TV show still got their party on!

On Monday night, some of the cast — which consists of Chloe Trautman, Madisson Hausburg, Juliette Porter, Brandon Gomes, Kelsey Owens, and Garrett Miller — were seen on social media celebrating their debut episode in a private home.

In one Instagram story video, Owens was heard saying:

“Our lives are about to change… I’m so excited. I hope you guys love it, we worked really hard.”

See the pics from Snapchat and Insta (below)!

THANK YOU ALL SOOOO MUCH FOR WATCHING! You all are AMAZING! Keep tuning in on Monday nights 10/9c on @mtv! This is gonna be a CRAZY summer ? #SiestaKeyA post shared by Madisson Hausburg (@madissonhaus) on Jul 31, 2017 at 9:12pm PDT