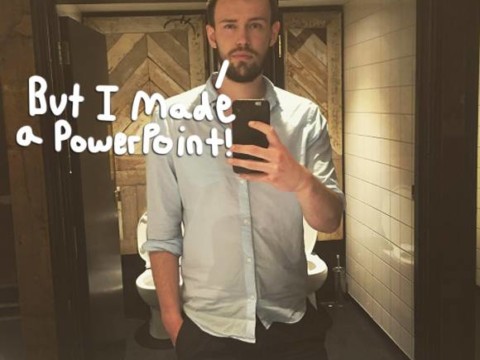 We may’ve just found our soulmate.

Earlier this week, Twitter user Ben Velzian took to the social media site in order to show off the elaborate PowerPoint he made for a beau he was supposed to go out with. The presentation was incredibly detailed as it featured all kinds of fun and outside-of-the-box date ideas — it even included the pros and cons for each option!

A guy asked me on a date today & said “any suggestions where to go?”.

Here are some example options. I think they are splendid ideas pic.twitter.com/uyz9Ef33RO
— BV (@velzzb) July 31, 2017

Sadly, Ben’s intended was not impressed with his planning skills as he blocked him (below) shortly after receiving the deck. Oh no!

That chap is clearly an idiot. And it seems as though others on the internet agree as MANY people have since vocalized their support for Velzian. See the best reactions to the extra PowerPoint (below).

He’s an eejit. You’re clearly adorable, so handsome. I’d date you with or without a PowerPoint ?
— Peter McGuire (@PeterMcGuireIE) August 2, 2017

Ben, this was amazing and hysterical. ? He is obviously a bore. Snooze.
— Christopher Golds (@chrisgolds) July 31, 2017

How rude. You’ve dodged a bullet @velzzb. Anyone not sold on a place they might film Flog It is not worth your ❤️ https://t.co/7Sc7Uj3BQu
— SJ Soane’s Museum (@SoaneMuseum) August 1, 2017

you: here’s this pdf I made!
Him: pic.twitter.com/1gMPpiFfpo
— Eduardo Fitch (@eduardofitch) August 1, 2017

Totally HIS loss! You sound fun and sweet. I hope some other fella appreciates you with or without a ppt (which I thought was awesome!!!) pic.twitter.com/G78VYSDWC9
— Stephanie Anderson (@ordinarygirlmn) August 1, 2017

Hear! Hear! Don’t fret too much over Ben though, as he’s since moved on from this rejection. The Londoner added online:

I think I dodged a bullet because OBVIOUSLY this is tongue-in-cheek and I don’t want someone who has 0 humour
— BV (@velzzb) July 31, 2017

Preach! Oh, and the PowerPoint has also gotten Ben plenty of other date offers (below).

We think Ben is going to be just fine. Keep doing you, bud!

This Man Was Savagely Rejected After Making A Detailed AF PowerPoint Full Of First Date Ideas — But Twitter Has The Dude’s Back!