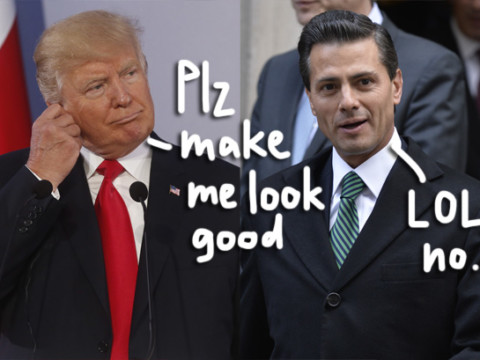 He’s going to build a wall, and Mexico is going to pay for it… pretty please?

Donald Trump kicked off his campaign with some hard-to-believe promises — though none were more cartoonish than his plans to build a border wall between the U.S. and Mexico to keep all the criminals and “rapists” out.

Despite Mexican president Enrique Peña Nieto declaring that his country would not pay for such a thing, Trump stood firm on his plans, promising supporters that his neighbors to the south would foot the bill one way or another.

But private conversations between the two world leaders showcase a much different Trump, one who is a lot more desperate than he comes across in public.

The Washington Post obtained transcripts of Trump’s phone call with Nieto from back in January, which reveal POTUS practically begging his Mexican counterpart to cave in!

The conversation started out with Trump trying to manipulate Nieto that they “both” have a political problem at hand. He said:

“On the wall, you and I both have a political problem. My people stand up and say, ‘Mexico will pay for the wall,’ and your people probably say something in a similar but slightly different language.”

But as the chat went on, Trump’s desperation on the matter began to show. He added:

“I have to have Mexico pay for the wall — I have to. I have been talking about it for a two-year period.”

Oh, so now the mighty Drumpf needs a bailout from the President of rapists? What a tool.

Luckily, POTUS had a plan for both presidents to work TOGETHER in misleading both their people — while making Trump look like a genius, of course. He pitched:

Nieto firmly stood against it, saying that Trump’s remarks about Mexico had placed “a very big mark on our back, Mr. President,” adding that “my position has been and will continue to be very firm, saying that Mexico cannot pay for the wall.”

To that, Trump responded like any dramatic teenager would, whining:

“But you cannot say that to the press. The press is going to go with that, and I cannot live with that.”

OMG Peña can’t you just, like… be cool about this?

Most of the chat appeared to be contentious (nothing like the “pleasant call” he had with Vladimir Putin the next day!), but that didn’t stop Trump from attempting sweeter methods of manipulation.

He told Nieto “you and I will always be friends,” noting that if they solved their Trump’s border issue, they would “almost become the fathers of our country — almost, not quite, okay?”

Of course, the conversation didn’t end without Trump shit talking his own country. He barked:

“We have a massive drug problem where kids are becoming addicted to drugs because the drugs are being sold for less money than candy. I won New Hampshire because New Hampshire is a drug-infested den.”

After the transcripts were released, residents of New Hampshire didn’t take kindly to Trump’s drug remarks — not to mention, his misleading comments about how he “won” the state that voted for Hillary Clinton on election day:

.@realDonaldTrump‘s comments about New Hampshire are disgusting. As he knows, NH and states across America have a substance misuse crisis 1/
— Sen. Maggie Hassan (@SenatorHassan) August 3, 2017

To date, @POTUS has proposed policies that would severely set back our efforts to combat this devastating epidemic 2/
— Sen. Maggie Hassan (@SenatorHassan) August 3, 2017

Instead of insulting people in the throes of addiction, @POTUS needs to work across party lines to actually stem the tide of this crisis 3/3
— Sen. Maggie Hassan (@SenatorHassan) August 3, 2017

Another sad day for POTUS!