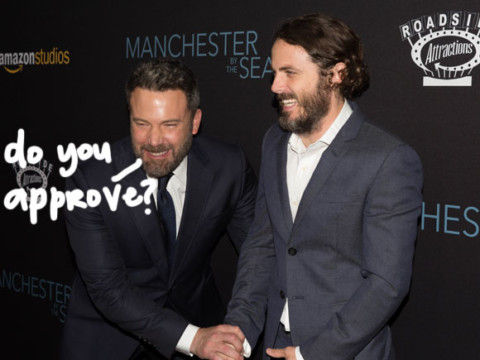 Ben Affleck, his girlfriend Lindsay Shookus, and his brother Casey Affleck were spotted out at a comedy show in Hollywood on Tuesday night — just proving the 44-year-old actor’s love life is in full force!

An eyewitness told Us Weekly:

“She was more in a work role, being a talent scout for SNL, rather than having a romantic date night.”

But it was still a family affair! Casey, 41, arrived to the venue shortly after the new pair:

“Casey and Lindsay said hello to each other and then Casey and Ben chatted for a while.”

“Ben and Lindsay were very kind to all the staff there, talking with the host, manager and those sitting around them. The comedians were definitely excited when they heard Ben was there, but Lindsay was the one they were trying to impress. Ben, Lindsay and Casey were laughing throughout a lot of the performances.”

After the show, Ben and Lindsay headed to dinner at Mario Batali’s Pizzeria Mozza. Sounds like they got rid of that pesky third wheel!

These two are pretty much inseparable!