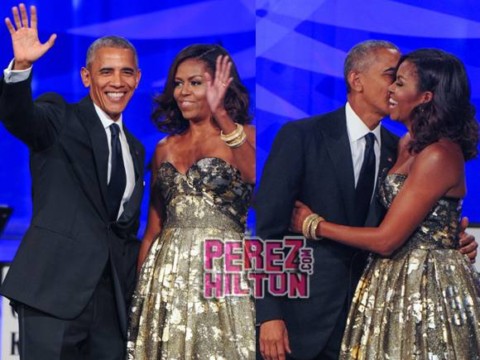 It’s days like these that make us miss having Barack Obama as our president.

44 turns 56 today, and many grateful Americans, including politicians, celebs, and friends, are celebrating the former POTUS with messages of thanks.

Also lots of “wish you were here” sentiments. Ha!

But as much as we adore the Prez, no one loves him more than the gal who knew him when he was still Barry — Michelle Obama.

Another year older, but the same phenomenal guy I married nearly 25 years ago. Happy birthday, @BarackObama — we love you so much! pic.twitter.com/3WrcGiKgz1
— Michelle Obama (@MichelleObama) August 4, 2017

And Joe Biden keeping the bromance alive is a close second…

Your service has been a great gift to the country, and your friendship and brotherhood are a great gift to me. Happy birthday, @BarackObama. pic.twitter.com/1uSEkU01k9
— Joe Biden (@JoeBiden) August 4, 2017

See who else wished Barack a happy bday (below)!

Happy birthday to the flyest to ever do it??✊? #ObamaDay @barackobama pic.twitter.com/iIkyuyhRzw
— Zendaya (@Zendaya) August 4, 2017

Oh! An excuse to post pictures of a real leader! Yes! Exciting! Happy Birthday, Mr. President! We miss you so, so, like, so much. So much. pic.twitter.com/S9yjfmKJHu
— Ava DuVernay (@ava) August 4, 2017

“We are the change that we seek” Barack Obama. Happy Birthday Mr. President and Happy #ObamaDay to everyone! pic.twitter.com/RSvwIJEPOn
— COMMON (@common) August 4, 2017

Happy birthday @BarackObama! Thank you for your grace, tenacity, and belief in the best part of humanity. I’m very glad you were born. ? pic.twitter.com/w2TZG67mjQ
— Carla Gugino (@carlagugino) August 4, 2017