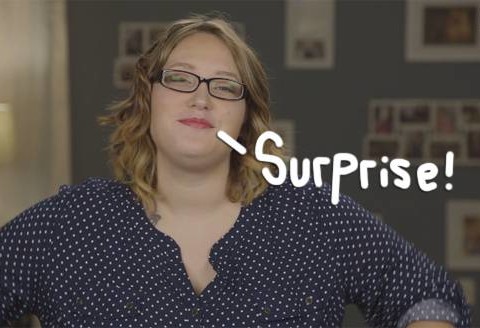 On Monday, it was revealed that Lauryn “Pumpkin” Shannon is having a baby. The reality TV star confirmed the news while filming a promo for the second season of her mom’s show, Mama June: From Not to Hot. Well, well!

And it seems Honey Boo Boo‘s 17-year-old sister is more than ready to be a momma as she told the cameras:

“I’m really excited to be a new mom, but there is some challenges that I am gonna have to face. I’m really nervous have having a baby because it does have to come out of my hoo-ha.”

That’s the only thing your nervous about?? Anywho, per Pumpkin, the sex of the unborn little one has yet to be confirmed, but she has feeling it’s a baby girl. The TV personality continued:

“If I had to bet, because of all the girls in our family, I’m probably having a girl. Could you imagine another fucking little me running around? You guys are gonna be fucked!”

LOLz. And despite her excitement surrounding this pregnancy, Pumpkin is NOT enjoying the actual pregnancy process. Mama June’s daughter continued:

“I really wish I could have this child right now. I hate being pregnant, but you know, you gotta do what you gotta do.”

Fair enough. Also, is anyone else wondering who the father is?? Last we checked, Pumpkin was engaged to boyfriend Joshua Efird.

While the teen didn’t confirm her baby daddy’s name, she did note that the father of her little one has a head “the size of a freakin’ watermelon.” No wonder she’s stressing about giving birth.

Congratulations, Pumpkin! Be sure to send us any updates about your little one!