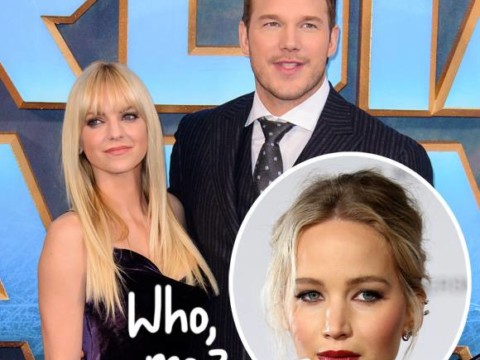 Whenever a beloved Hollywood power couple splits, people look for someone to blame.

And because no nanny was involved (that we know of) in the downfall of Chris Pratt and Anna Faris‘ marriage, fans are pointing the finger at the next logical target: Jennifer Lawrence.

On Sunday, the couple announced they would be legally separating after eight years of marriage — but didn’t go into detail about why they split other than that they were trying “really hard for a long time.”

Well, Twitter is putting together some theories, and most were quick to accuse Lawrence of getting too close to Pratt on the set of their 2016 film Passengers!

Related: Anna Spoke On ‘Loneliness’ A Week Before Separation Announcement

Back in 2015, there were rumors that Faris was nervous her husband would cheat on her with J.Law while shooting the sci-fi flick. The Mom star was particularly rocked by the reports, admitting reading the claims was “weirdly stinging.”

Now that the twosome has called it quits, fans shared their own stinging theories on the Joy actress’s involvement — some even betted it wouldn’t be long until Pratt and Lawrence announced they were dating!

We can’t say we’re behind this theory, mostly because the blonde bombshell is “getting serious” with her older man Darren Aronofsky.

But that didn’t stop J.Law from getting blamed for the breakup of the year — see what people had to say the drama (below)!

I don’t know why but I blame Jennifer Lawrence for Chris and Anna getting divorced pic.twitter.com/5bPxEmecNe
— Matthew Paul (@TheMattHart2007) August 7, 2017

Chris Pratt and Anna Farris are filing for divorce. I feel like Jennifer Lawrence has a role in this. Bitch has a role in everything.
— Jumah ?? (@WokeMutant) August 7, 2017

Doesn’t surprise me – did you see him and Jennifer Lawrence when on shows/chats together. #FlirtingMuch
— Lorraine McCafferty (@Rose_Ita_) August 7, 2017

If we find out Chris Pratt is dating Jennifer Lawrence, I will quit Hollywood.
— Chad Darnell (@ChadDarnell) August 7, 2017

However, we think one user debunked this theory with flawless form:

What do U think happened with Chris and Anna?