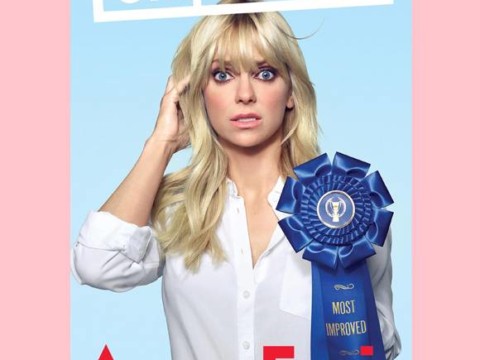 We certainly hope the separation news doesn’t derail this book; we’re more interested in reading it now than ever before.

In an awkward bit of timing, Anna Faris‘ memoir Unqualified is slated to hit stores on October 24.

Related: Anna Talked About The ‘Loneliness’ Of Playing A ‘Public Character’ A Week Before The Announcement

According to EW, the book, some of which was sent to press in an early form for review, tells the entire love story between Anna and Chris Pratt, from meeting to having their son, Jack, to navigating the ups and downs of Hollywood.

Well, obviously it doesn’t tell the entire story; the book was written well before the split. Chris even wrote the foreword, sweetly penning about Anna:

“She is fierce and very loyal, she rarely punishes people. But when she does, it’s powerful and terrifying, and when it’s over, it’s really over. (Power and terror are acceptable in a partner but absolutely necessary in a mother, as far as I’m concerned.) And she does mother very well, both our son, Jack, and me, when needed.”

And if you think what he said about her was loving and respectful, you ain’t seen nothin’ yet.

The entire focus of the book is love and relationships, meaning almost the entire thing is about Anna’s relationship to her husband of eight years.

She reveals the first thing that drew her to Chris, even though she was married to another man when they met on the set of the retro comedy Take Me Home Tonight:

“When I met Chris, the most striking thing about him was that he knew how to be happy. When I looked back at my marriage, and many of my relationships before it, I realized I had always equated cynicism, discontent, and anger with intelligence, and getting together with Chris made me reexamine that. It made me realize that being with someone who was well-liked and popular actually made me happy.”

She also writes about their ridiculously passionate, spontaneous courtship, which culminated in getting married in Bali on the spur of the moment when they found out their hotel offered a wedding service.

For those who still think Jennifer Lawrence had something to do with all this, there is plenty of material devoted to jealousy over costars — a jealousy that went both ways as Anna shared the screen with hunky Chris Evans.

But the two always managed to resolve that tension and ignore Hollywood gossip to become friends with the other men and women in their lives.

VOTE: Still Love J.Law Or Totally Over Her??

Unfortunately, some of the most romantic parts of the book are now the most heartbreaking.

For instance, Anna writes about her dreams of the couple’s future together, retiring from Hollywood and moving to Washington State where they can eat off the land and live a serene life out of the spotlight. She also talks about wanting more kids, something we’ve heard may actually have been one of the big schisms in the relationship.

There’s also an entire chapter devoted to describing all the sweet things Chris does for her, like braiding her hair, handwriting letters to her from all over the world, writing her poems, and sending her flowers EVERY WEEK at work.

Assuming it doesn’t get pushed, Unqualified is available for pre-order now. Will YOU be reading?