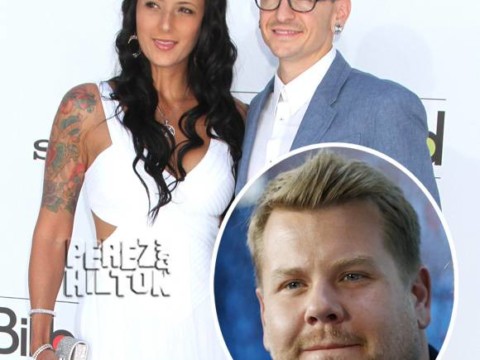 The band’s installment was initially supposed to air in October, but now James Corden says the decision whether or not to air the episode will be up to Bennington’s family.

The Late Late Show host, who produces the Apple Music series, says the episode will only air if given the green light from the rocker’s family and bandmates, admitting it’s “a conversation we haven’t even thought about having right now.”

He explained the delicate situation to the Associated Press:

“We will approach in whichever manner his family or the people that were involved in that episode, however they would like it to be handled. We consider it to be not our decision to make. We will navigate as delicately as possible and I’m just an ear to whatever wishes they would want because I don’t think there’s any other way we could deal with it, really. It’s completely up to them and that’s a conversation we haven’t even thought about having right now… It’s a tragedy.

A classy way to handle such a devastating situation — and appreciated by Bennington’s loved ones.

On July 14, the band tweeted a photo of the appearance with comedian Ken Jeong — days before Bennington’s body was found on July 20:

Only time will tell if Talinda gives her blessing, but it would mean a lot for fans to get to see Chester goofing off with his bandmates one last time.

Do U think Linkin Park’s Carpool Karaoke segment will air?

Whoa! Watch This Kid Belt Out An INCREDIBLE Rendition Of Let It Go In...