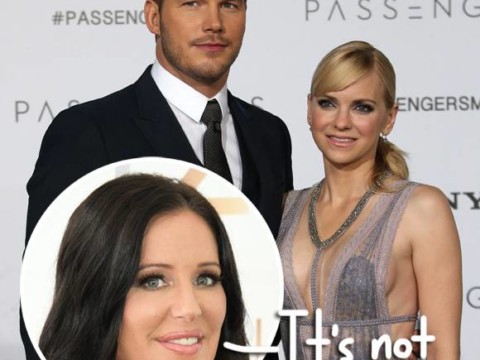 Like the rest of us, Patti Stanger is rooting for Chris Pratt and Anna Faris to get back together.

But unlike everyone else speculating about the couple’s separation, the Million Dollar Matchmaker actually has an inside scoop!

How, you ask? Apparently, the reality star is “close” to the couple — and while she doesn’t know exactly what happened between them, Patti thinks Chris and Anna can turn it around!

Related: Celebs Who Became Bigger Stars Than Their Spouses!

In a Facebook Live interview with ET, the matchmaker explained she hasn’t given up hope on her “favorite” couple yet because they’re still apparently living together!

On Thursday, she revealed:

“OK, so this is really hard because I’m close to them. I’m upset about it. The day it happened I actually texted them. I don’t know what happened there, [Chris] is still living in the house. Let’s pray it turns around.”

Patti usually matches up new romantic pairings, but in this case she’d use her expertise to keep the two together. She continued:

“I want them to get back together. So, I’m not fixin’ them up — I would just be the counselor between them and go, ‘What really is the issue here?’ Because she’s living in the house, so someone threw out the curveball, maybe the publicist, I don’t know who … you just don’t really say something when they’re [still] living in the house [together].”

The 56-year-old was just as caught off guard as the rest of us when the beloved duo announced they were splitting up after eight years of marriage.

Even though reports claim the wheels are already in motion for a divorce, Patti thinks “there’s hope” Chris and Anna will reconcile because there’s “a lot of best friend factor there… they’re very close as BFFs.”

Related: Anna Is Releasing A Memoir In Just TWO MONTHS!

Patti gave her two cents on what caused the couple to call it quits — and she didn’t think it had to do with Chris’ rising stardom, despite what other insiders have claimed. She said:

“I feel like it’s communication. It has nothing to do with him being [a] bigger [star] than her. She is, as we are [here] at CBS, she has the No. 1 show right now on CBS [Mom]. I should only be so lucky that Chuck Lorre makes me a show. And who are you to put her down for 40? I wanna look like that, she’s stunning, OK? And then [Chris] made a couple of big movies? That’s not it. But it could be, like, he’s not in town with her, she’s raising the kid alone and there could be issues with that.”

Patti also blasted rumors that an affair is to blame for the separation, continuing:

“I’ve been to their house. I don’t think anyone cheated. I think it’s he’s on his career path to make this trajectory to become really successful at what he does and timing is off, and that could be it. And maybe she feels she’s taking care of [their 4-year-old son, Jack] too much. Maybe they’re not on the same page at the same time, but I don’t feel like you can’t work it out.”

Chris Pratt & Anna Faris’ ‘Close’ Friend Patti Stanger Isn’t Giving Up Hope On The Couple Just Yet! Find Out Why!

Nevada Declares State Of Emergency After Running Out Of Recreational Weed — Just One...