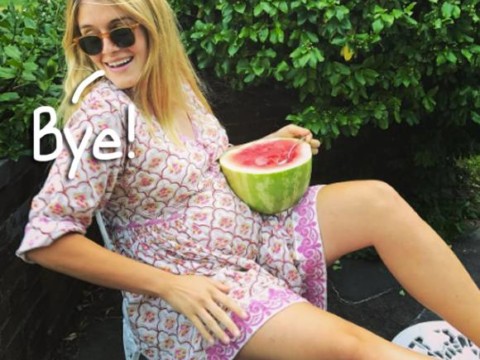 ABC‘s daytime talk show The Chew is going to see a major change this season: Daphne Oz will be leaving the show after six seasons on air, according to an announcement on Friday.

She will not be replaced by another host, either.

The daughter of Dr. Mehmet Oz, Daphne had been with the program since it launched in 2011 along with other cohosts Carla Hall, Mario Batali, Michael Symon, and Clinton Kelly.

But now, she’s the first one to break ranks.

She said in a statement about her departure:

“It has been so much fun having lunch with you on TV’s most delicious daytime show for the past six seasons, and I am immensely grateful to have found dear friends in my co-hosts and our team. I have had the great privilege of growing up at our family table, and have shared some huge milestones along the way – including the birth of my first two children, and recent announcement of a third on the way! – and am lucky to have had The Chew as a bright beginning to my career.”

And it sounds like an amicable enough split, with series creator and executive producer Gordon Elliott saying:

“She is one of the greatest natural broadcasters I have ever worked with. The moment she sat at the table with Mario, Clinton, Michael and Carla, I knew we had a great television show. Her chemistry, honesty and intelligence are her trademarks, and they will stand with her wherever she goes.”

And a third statement, from ABC-owned TV stations group president Rebecca Campbell, hints at why Daphne may have now decided to leave The Chew, especially considering the TV host is now expecting her third child:

“When Daphne started with us, she had recently graduated college, was a new bride and ready to take on the world. She is now a mother, broadcaster, writer and inspiration to millions of viewers whom she has shown how to create healthier eating options for themselves and their families. She really has created a unique brand for herself and the network.”

Thoughts, Perezcious readers?! Will you miss Daphne on ABC’s daytime show this year when its new season kicks off in a few weeks???