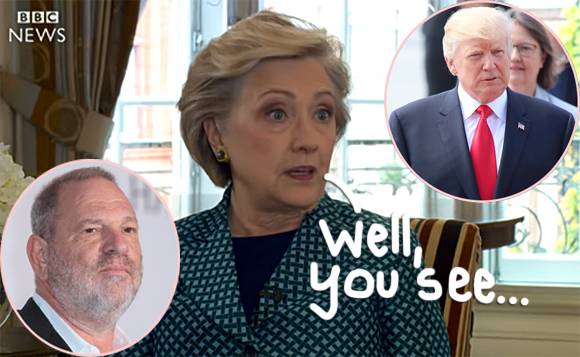 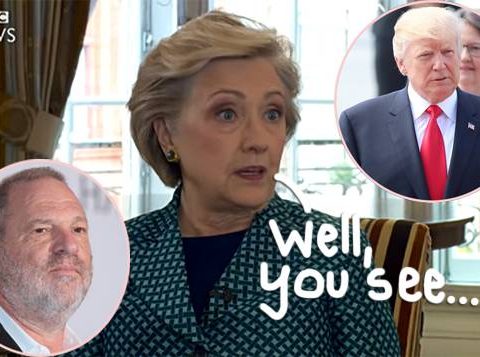 We’re sure Hillary Clinton haters are going to put her on blast for this.

On Friday, the former Secretary of State sat down with BBC‘s Andrew Marr to promote her book about losing the presidential election, titled What Happened. Unsurprisingly, the interview took a turn away from the contents of the book and towards pressing current topics.

Specifically, Marr asked the once Presidential hopeful to weigh in on the Harvey Weinstein sexual misconduct scandal as the disgraced Hollywood heavyweight has donated thousands to her various campaigns. Hillary doubled down on her denouncement of Weinstein as she told Marr:

“I was really shocked and appalled because I’ve known him through politics as many Democrats have. He’s been a supporter – he’s been a funder for all of us, for Obama, for me, for people who have run for office in the United States. So it was just disgusting and the stories that have come out are heartbreaking. And I really commend the women who have been willing to step forward now and tell their stories.”

Beautifully said. Sadly, Secretary Clinton misspoke as she continued her train of thought:

“I think it’s important that we not just focus on him and whatever consequences flow from these stories about his behavior but that we recognize this kind of behavior cannot be tolerated anywhere, whether it’s in entertainment, politics… after all, we have someone admitting to being a sexual assaulter in the Oval Office… There has to be a recognition that we must stand against this kind of action that is so sexist and misogynistic.”

So close to being a perfect statement. Obviously, the 69-year-old politician is referring to Donald Trump‘s Access Hollywood tape scandal. In case you forgot, during the presidential campaign, the Trumpster was heard boasting about grabbing women “by the pussy” in footage from 2005.

While POTUS has admitted to participating in “locker room talk,” he has never — on the record, at least — admitted to committing sexual misconduct. His off-the-record language, however, was still highly disturbing and promoted the idea that sexual assault is all okay in good fun. UGH.

Hillary laid into Trump once more as, after skillfully dancing around questions about her husband Bill Clinton‘s own sex scandal, she added:

“That was subject of a huge investigation in the late 90s and there were conclusions drawn. That was clearly in the past. It is something that has to be taken seriously, for anyone not just in entertainment… The really sad part of the campaign was how this horrific tape, what he said about women in the past what he said about women during the campaign, was discounted by a lot of voters.”

So shady — and we LOVES it. Nonetheless, Clinton avoided making any additional comparisons between Trump and Weinstein as she refused to answer if the two businessmen were “the same kind of person.” She noted:

“I’m not a psychologist, I can’t draw that conclusion. There are credible reports from women about both that sound very similar.”

Good save, doll! Unfortunately, Hillary isn’t finished with this Weinstein drama as there’s some confusion over what she’ll do with the money donated to her campaign fund. While the former Senator previously stated that she planned on giving the funds to charity, she recently told Channel 4 that she now plans to give the estimated “$16,000” back to Harvey.

Hey, as long as she doesn’t keep it, we’re cool with whatever she chooses. Be sure to watch Hillary’s sit down with Andrew for yourself (below).