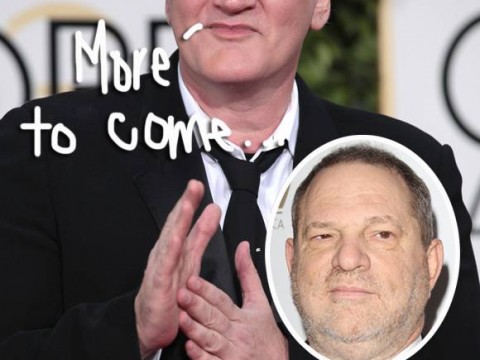 With so many bravely speaking out to condemn Harvey Weinstein‘s inappropriate behavior amid his sexual harassment and assault scandal, Quentin Tarantino had little to say.

The director, who has been longtime friends with the disgraced Miramax cofounder, released a short statement on the controversy via Amber Tamblyn on Thursday.

Last night I had a long dinner with my friend Quentin Tarantino. He has asked me to share a statement with you regarding Harvey Weinstein.
— Amber Tamblyn (@ambertamblyn) October 13, 2017

It’ll be interesting to hear what he has to say.

It was the same with Cosby. So many men needing to process knowing this about their hero… no mention of the women.
— erin whitehead (@girlwithatail) October 13, 2017

that’s basically a ‘placeholder’ for ‘ug, I don’t want to sound too mean if I dont have to; let’s see what develops’
— Mike Schultz (@biddy_biddy_bop) October 13, 2017

Amber, on the other hand, thinks it’s a good idea to wait:

Guess we’ll have to see!