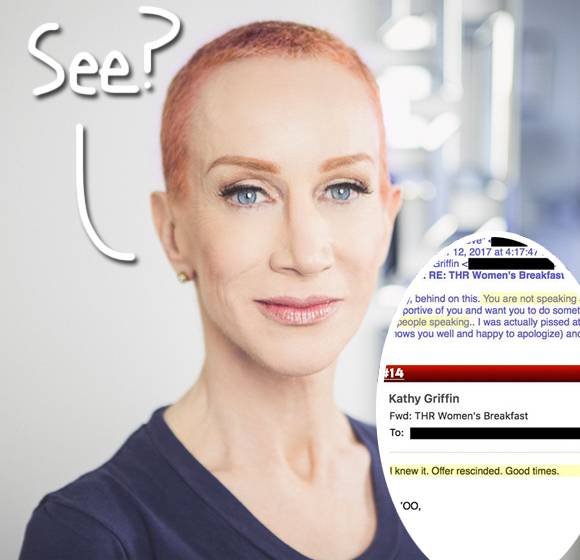 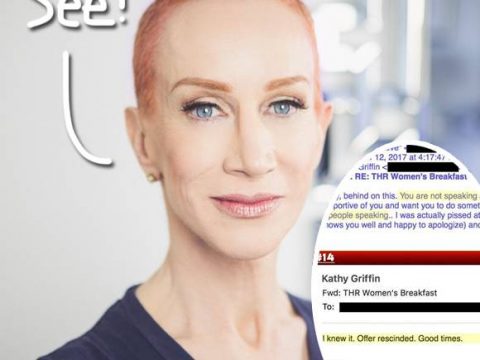 She went from My Life On The D List to life on the blacklist.

Kathy Griffin has been a Hollywood pariah for months following the release of publicity photos in which she held the severed head of Donald Trump in effigy.

For many, it was a bad joke taken too far, far enough even to get her investigated by the Secret Service.

But is it all worse because she’s a woman?

In a new post on Facebook Monday morning, the comic says she’s been kicked off The Hollywood Reporter‘s Power 100 Women In Entertainment breakfast, and she has the emails to prove it:

“I do not buy their official reasoning and I believe “the word has been put out” on me. I can’t help but take this as another occasion where Hollywood is blacklisting a woman and silencing her.

After decades of hard work in this industry, it’s my opinion that this is not right nor justified. Yeah, I took one photo holding up a children’s Halloween Trump mask with ketchup on it…so what? How’s that feigned outrage working out for you now in light of a possible impending nuclear holocaust?”

As far as her claims of “blacklisting” go, we know she’s been fired from a lot of gigs. But she says it’s now ALL of them:

“I just want to make you laugh, even though I don’t have one single day of paid work ahead of me in the United States for the rest of my life. That’s what blacklisting is.”

See the full post, including pics of the emails (below):

This isn’t the first time Kathy has alluded to her position being worse because she’s a woman.

In fact, just last week she compared her silencing at the hands of Trump to the silencing of women by predators like Harvey Weinstein.

She’s hardly the only one making Trump and Weinstein comparisons (they’re both businessmen known for bullying who have now been accused by over a dozen women of sexual harassment and assault), but that’s beside the point.

But in posts like this one she is making the case that it’s far worse for her as a woman because there’s already a system in place to shut her down:

Check out my exclusive with The Daily Mail on my return to the stage: goo.gl/SbEbo9 (Link In Bio)A post shared by Kathy Griffin (@kathygriffin) on Oct 10, 2017 at 2:13pm PDT

We don’t have an example quite so violent, but Snoop Dogg did release a music video in which he mimes shooting a Trump stand-in. And he IS still working.

So let us know, Perezcious voters…